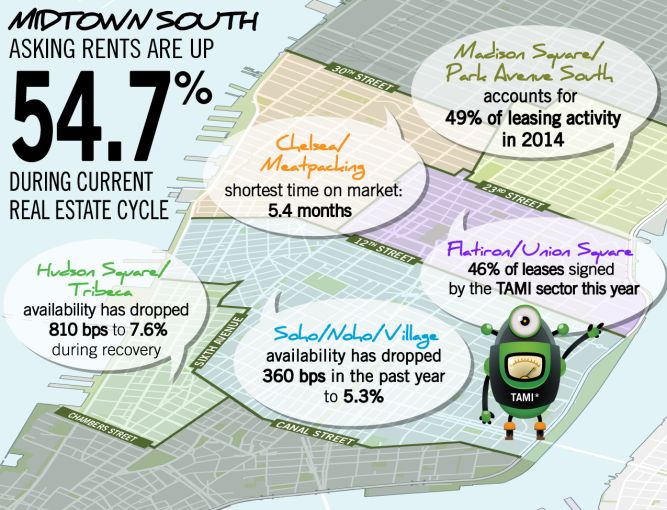 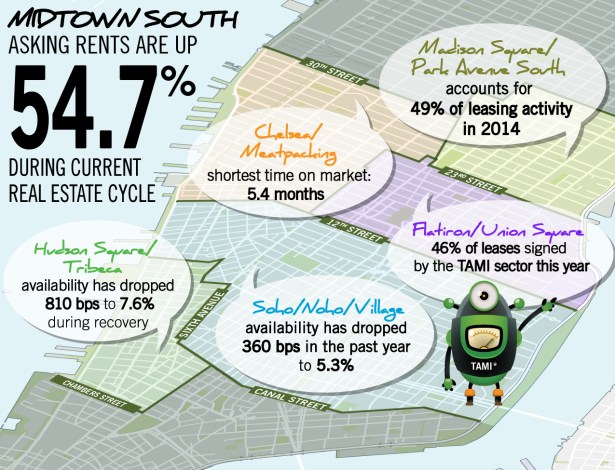 Throughout this real estate recovery cycle, Midtown South has led the charge for the Manhattan office market and currently has the lowest availability rate of the three major markets at 7.9 percent. Midtown South’s overall average asking rents are up 54.7 percent since they bottomed in January 2010, by far the greatest rent increase compared to Midtown and Downtown. The five submarkets that make up Midtown South have experienced record-breaking trends during this recovery cycle, as TAMI (tech, advertising, media and information services) tenants continue to seek space in these neighborhoods. So what are some of the individual submarket trends that are making Midtown South one of the most sought after markets in the nation?

The Hudson Square/Tribeca submarket has led all submarkets during this recovery cycle with an 810-basis-point-drop in availability. At 7.6 percent, its availability is lower than eight of the nine submarkets in Midtown, which is unprecedented.

Soho/Noho/Village availability dropped 360 basis points in the past year to 5.3 percent, the lowest in Manhattan. Even with availability rising last year with the addition of 51 Astor Place to the market, space does not remain on the market for very long, as it is leased on average within 5.5 months.

The Chelsea/Meatpacking submarket actually leases space more quickly than Soho/Noho/Village, as it holds the record for the shortest time on the market, with spaces leasing on average within 5.4 months.

Flatiron/Union Square is quickly becoming the hotbed for TAMI tenants, as 46 percent of the submarket’s 2014 leasing activity was by this sector, the most throughout the city. This explains why overall asking rents surpassed $70 per square foot for the first time in history.