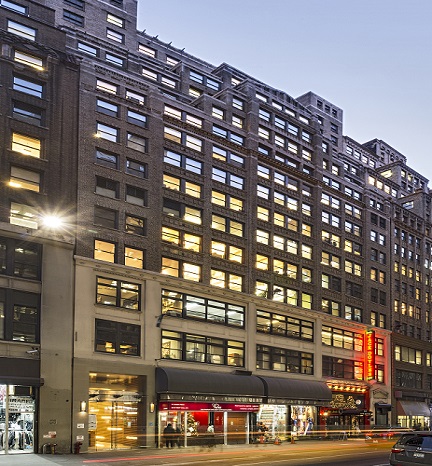 The five-year acquisition loan from The Union Labor Life Insurance Company on behalf of its Separate Accounts closed on Tuesday night, a person familiar with the transaction said on background. The unwieldy name refers to Ullico’s real estate investment group.

Mr. Weisz’s private real estate investment firm finalized its $80.2 million acquisition of the 18-story office property from Hidrock Realty at the same time as the closing of the loan.

The transaction marks the first Manhattan buy for RPW, which is the largest private owner of office space in Westchester County.

“Our business model for the past 30 years has been to buy buildings that are performing or not and to turn them into the best buildings in that region,” Mr. Weisz told MO. “Our intent for 240 West 35th Street is to build on what is existing and take it another step. We are placing a construction crew immediately to improve on the building, starting from the basement and going all the way up.”

The new owner said his firm is designing contemporary pre-built spaces that will vary between 1,000 square feet and 12,000 square feet. “We’ll make the space available for companies that might need that space in a moment’s notice,” he said.

RPW has hired Newmark Grubb Knight Frank‘s William Cohen and Andrew Weisz, a relative of the new owner, to serve as the building’s leasing agents.

The Garment District surrounding Penn Station has become increasingly attractive to real estate investors in the past year due to its upside potential, according to Mr. Weisz of RPW and the other person in the know. “The intent of RPW Group is to use 250 West 35th as a foothold for us to expand in that market,” the building’s new owner said.

Asking rents in Midtown South, which includes the Garment District, average $67 a square foot, according to CBRE’s latest Manhattan Marketview Office Snapshot. “We will be extremely competitive and we will be under that number,” said Mr. Weisz.

The office property, built in 1924, is about 80 percent leased. The building contains retail space on the ground floor, which is currently occupied by the Spanish restaurant and hookah bar Café Nunez.

Hidrock bought the office building located between Seventh and Eighth avenues for $58 million in August 2008, city records show. Hidrock put $6 million into capital improvements on the building, which included renovations to the lobby, new elevators and updated HVAC systems, as Commercial Observer reported when the full-service real estate firm put the building on the market in January 2013.

Wells Fargo provided a $40 million loan on the office property in July 2013, according to previous loan documents.

Richard Horowitz of Cooper-Horowitz arranged the acquisition loan from Ullico’s real estate investment arm. The broker and lender both declined to comment.

Update: This story was edited to include comments from RPW Group’s Robert Weisz.