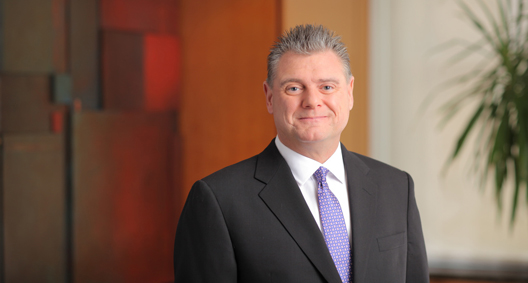 Mortgage Observer sat down with the gregarious head of the New York real estate group at BakerHostetler, who joined the prestigious firm from Herrick Feinstein in February and has been tasked with augmenting its real estate practice. Over smoked fish at Barney Greengrass, the 52-year-old Queens native told us about his clients’ fears of an overheated market, the team he is building at Baker and being mistaken for support staff at his first job at a white shoe firm.

Mortgage Observer: How did you get involved in commercial real estate finance?

Dennis Russo: I always knew I wanted to be a lawyer. I did real estate, redeveloping properties for a number of years, almost exclusively in Brooklyn. We almost lost our shirts—twice. But I always enjoyed dealing with the closings. The intellectual pursuit, deals with hair. They keep you going. You become a deal junkie. So I started at Reid & Preist in 1986 and certainly I was the only person with a vowel at the end of their name there. They thought I was the cook, I think.

It seems like you are very busy over at Baker, now.

Yes. They only had about 50 attorneys around the U.S. in real estate but a great number of services —a lot more than many other firms in New York, such as an environmental practice and a practice that [deals with] historic credits. I was brought in to build the New York practice. The idea is to hire about 40 attorneys. I want to make it one of the go-to firms in New York. I want to build a great group that covers a lot of different areas, but that also offers good rates. The way we can do that is we can send out business to our real estate brethren in other offices, who sometimes bill at half the rate. You get the experience of the New York people but don’t have to pay as much. We will do the deal but, for instance, with the due diligence, someone in our Denver or Florida or L.A. office can do it.

You said you do a lot of J.V.’s. Are you seeing more and more J.V.’s these days?

Developers almost always have a J.V. with a big money partner. We represent, most times, the money. I represent AEW Capital Management and Wexford Capital, and on the developers’ side, Sherwood Equities. Joint ventures are one of my specialties, and they make the world go round. I also do a lot of hotel deals. What makes a good hotel deal is a good operator. A good operator will choose the right hotel for the area. What’s also key is buying the land at a good price and controlling the construction. Making sure that you don’t all of a sudden say, “You know what? It would be nice to have marble walls.”

So making sure the architect doesn’t have the final say?

Yeah. So that they don’t go, “We need a transom here.” Because a transom doesn’t equal dollars. If it’s a Holiday Inn, it’s like, “Do we need this?”

You did some financing for the head of a major sports team, right? What other interesting clients do you have?

We do financing for high net worth individuals, like Larry Gagosian, the art dealer. The transactions are hard because [clients] don’t want anyone to know their business. The sports team owner, which I cannot even say which state they’re in, because they want to stay confidential, wanted a line of credit to use to invest in other things. It’s really complicated when you are taking, say, art, and maybe art that is in the United States, or that is in another country, and saying, “How much is it worth?” [The person says], “Take my yacht!” and “What about my house in South Hampton? How much is it worth?”

So you are getting a lien on all these assets?

Yes. But you want to avoid a mortgage recording tax.

How do you do that?

You can put a lower mortgage on it, and then if it’s an LLC or a partnership, you take a mezz loan on the partnership that owns the asset.

What are your clients coming to you with concerns about?

Well, daily, they are asking about where the market is at. Prices and competition are nuts. You spend time doing due diligence on a deal and then you get beaten out by some foreigner, or somebody who needs to put money out. You spend a lot of time spinning your wheels.

Do 1031 exchanges push people to close?

Sometimes, but not really that much. They more worry about musical chairs. They worry if they are going to be the last one holding an asset. For instance, if you build condos and then you can’t sell at [the right price per square foot], then you have 2007 to 2009 all over again. A lot of people are also looking outside New York. Most of the major cities, though, are not that different [in terms of pricing and competition], by the way. So they are looking even further. We have a client who bought three office buildings in Nashville. They don’t have the choice to buy here.