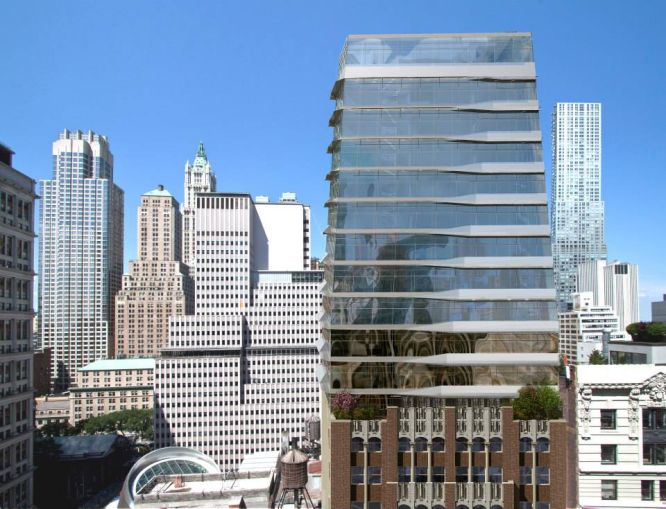 A rendering of 17John. dghigliotty

And the crowd cheered.

Prodigy Network, a New York-based crowdfunding start-up, completed its acquisition and planned redevelopment of 17 John Street in lower Manhattan with more than $25 million of crowdfunded equity, a $56 million senior loan from Deutsche Bank and $20 million from a New York-based institutional investor, according to a company release. The deal marks the second crowdfunded Manhattan hotel project Prodigy Network has successfully taken on in less than a year.

The firm purchased the 15-story rental building at 17 John Street on August 28 for $83 million with plans to convert the property into a 23-story, 191-unit extended stay hotel to be rebranded as 17John. Prodigy Network acquired the property from 17 John Street Associates LLC, an entity managed by the New York-based development and management company Metro Loft.

“We are thrilled to have closed on 17John,” said Rodrigo Nino, Prodigy Network’s chief executive officer. “Its location is at the core of the emerging Financial District and represents an unprecedented opportunity for those who have always wanted to invest in Manhattan real estate.”

The nearly $20 million difference between the purchase price and the loan proceeds and crowdfunded equity is “due to closing costs, interest reserves, and pre-development reserves that will be put to work over the course of the next year prior to beginning construction,” he told Mortgage Observer.

About 100 accredited investors from over 12 different states and 10 countries invested a minimum of $50,000 for a stake in the property, Mr. Nino added.

“We anticipate that investors will earn annually compounded returns ranging from 17 percent to 23 percent depending on the property’s ultimate sales value,” he said.

In November 2013 Prodigy Network finalized its $120 million AKA Wall Street project in lower Manhattan with $31 million of crowdfunded equity, a $72.5 million senior loan from CIBC and $16.5 million of institutional equity. The AKA Wall Street hotel is now under construction and slated to open in the summer of 2015.

Prodigy Network’s Manhattan portfolio is estimated to contain more than $450 million in Manhattan commercial real estate properties with over $70 million of crowdfunded equity.