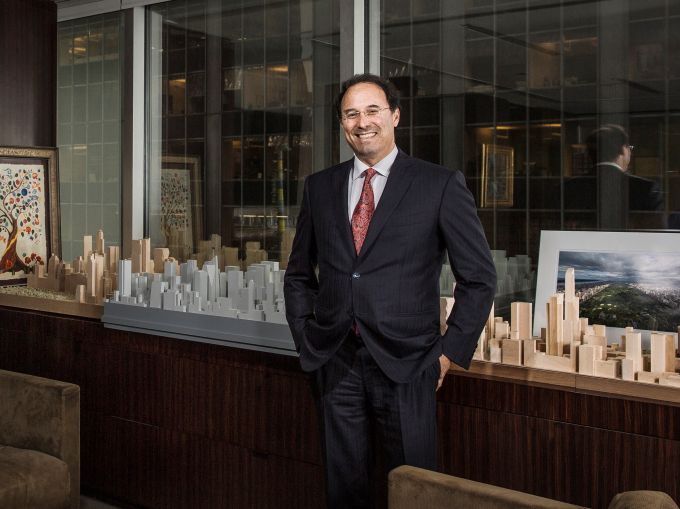 Gary Barnett is the founder and head of Extell Development Company, a firm he started in 1989. As one of the city’s leading—and most divisive—contemporary developers, he has created amenity-laden condominiums like One57, the Orion and the Aldyn, hotels like the Hyatt Times Square and W Times Square and office towers like the International Gem Tower. Mr. Barnett started in the diamond trading business in Belgium and cut his teeth in the real estate industry buying shopping malls and office buildings in the Midwest. Extell’s current portfolio exceeds 20 million square feet. Commercial Observer recently sat down with Mr. Barnett in his conference room to talk about his aggressive development stance, his favorite project and the “poor door” controversy.

Commercial Observer: Would you say you’re the most aggressive developer in Manhattan?

Mr. Barnett: I don’t know if “aggressive” would be the right word. We’re active. I think there are other developers that do more projects than we do. They may be smaller projects. Joe Chetrit, for example—he’s very active. I don’t think people know how active he is. And there are a lot of smaller borough developers that are doing five, six, 10 small developments at a time.

How many projects do you have in the works right now?

We have two projects which we’ve just finished. That’s the office building, International Gem Tower, and the Hyatt Times Square. We’re also completing, within the next six to nine months, One57 and the Carlton House. And the last one we’re doing on Riverside Drive, at One Riverside Park, and that will also be completed next year. Those five projects we got through the recession, thank God. It was a challenge.

We are also starting our wave of new projects consisting of 225 West 57th Street, a very tall building. That’s where Nordstrom’s going. We’re doing the Pathmark site downtown on South Street on the corner of Pike Slip and South Street. We’re also beginning work on 70 Charlton Street between Varick and Hudson [Streets]. We’re beginning work on East 14th Street between [Avenues] A and B. That will have very nice residential rentals and retail. We’ve done demolition there. And we’re doing 555 10th Avenue, where we’ve just about finished the foundation and are going vertical with 600 residential rental units plus some dormitory.

How many square feet do the five projects that you have just finished or nearly finished comprise?

You are a big risk-taker, right?

I don’t think so. I try hard not to take big risks.

Maybe it’s perceived by others as risk, but to you as strategic.

I think so. I think that’s a fair statement.

Not everyone does this monopoly thing.

So you do think it’s risky?

The riskiest deals I’ve done have been assemblages. And I’ve lost money on assemblages, but never huge money. I did lose money on development, on buildings, in the crash. We lost money in Miami; we lost money on one or two land pieces. There are a couple of pieces in Manhattan. But those deals, I don’t think they were risky deals when we started, so to speak. The assemblages are always risky deals. They are not for the faint of heart. But the other deals, even  on the development deals, I don’t think they were so risky when we started. The market collapsed and they became risky.

You worked in the diamond industry in Belgium prior to getting into the real estate world. How do the industries compare?

I think the one thing that is similar [is that] you take parts and you create something that hopefully is much better and bigger and more special out of them.

I guess I’d have to say One57. I think it’s a beautiful building. It’s tall. It has a beautiful hotel in it, Park Hyatt, which I think is the nicest hotel in the city. And we’ve been working on this for 17 years. It was tremendously challenging to complete the assemblage, to build the building. We had the hurricane. We had the recession. Now it’s picked up nicely. [It’s nice] to see that all come together and to actually have gotten the building built and it’s a beautiful, successful building.

How do you manage all of your projects at once? Are you personally overseeing these projects?

I normally oversee it all. I actually dig out the ground myself … just joking. It’s a sizable company.

When you’re a developer you inevitably get pushback at times. Let’s talk about some of that. First up, the community has been vocal about the shadows cast by tall buildings like One57, over Central Park.

The shadows [issue] is funny. Somebody showed me a poll that they had taken on their own informally on Central Park South and it turns out that 80 percent of the people said they wanted to be in the cooler space of the park. They preferred shadows [laughs] because it was hot. They took [the poll] in the summer. I just think it’s way, way overblown. It’s minutes at a time. Yes it’s long. But it disappears—it moves—in five or 10 minutes.

How did the shadows issue start?

One fellow was playing with his kid on the Upper East Side [on] Fifth Avenue and it was getting to be 5, 6 p.m.-ish and it was becoming dark. His daughter said, “Oh it’s getting cold.” And he looked up and he saw the shadow. He said everybody was leaving. I said, “Maybe everybody is leaving because it’s time to go home for dinner.”

What about the Art Students League of New York? Some of its members sued to block the transfer of the league’s air and cantilever rights (for $31.8 million to your firm for the tower at 225 West 57th Street), saying the price wasn’t enough. Late last month, a New York Supreme Court Justice dismissed the lawsuit.

It made no sense what they were basically saying. For the league to turn down tens of millions of dollars that they’ll never get anyhow just because of a cantilever 300 feet high—how does that make any sense? Who in their right mind would tell them to do that? My understanding is that this was just political infighting in the league by some disgruntled people who were running for office and didn’t get in, and said, “We would have done better and gotten you even more money.” Everyone can always second-guess. It’s easy to second-guess when you don’t have to deliver yourself.

The city approved 40 Riverside Boulevard with separate entrances for the market-rate residents and the affordable housing residents, with the latter entrance being called the “poor door” in the tabloids. It was approved by the previous administration. A City Hall spokesman told Newsweek that the current administration is “in the process of changing it.”

It’s something we had to do. Truthfully, I don’t think anybody’s really attacking us.

Will you fight back if the city changes it?

It’s not going to affect this project. This project has been approved already. It’s almost built. Nobody wants to take away the units that are already currently being built. It could affect other projects down the road.

Have you ever confronted this issue before when building a condo?

I think this might be the first one we’ve done with affordable housing.

Will Extell manage the affordable housing portion of 40 Riverside Boulevard?

Why is the second door necessary?

Those are the regulations. The regulations as they now stand actually require us to have a second door. If you were ready to put the units throughout the whole building, meaning some of the best views, some of the largest units, if it was like an equal distribution, you could have one door. But you have to give away some of the most valuable [real estate]. I have to give away multi-million dollar units if I’m going to spread them throughout the building. So there’s another way to do it, a separate building segment. They would require you to have a second door for that segment. It’s being treated like a second door.

Where does it stop?

We’re talking about doing the dormitory at 555 10th Avenue. Same building. One door. I’m doing 120 affordable [units]. The dormitory has its own separate lobby on the side on 41st Street. Students are going to be up in arms demonstrating—“We’re the poor students. We have a separate lobby and separate entrance.” Maybe we shouldn’t allow that either. [The residents’] entrance is on 10th Avenue. Maybe I’m wrong to do that, too.

What do you think about Mayor Bill de Blasio?

I like the mayor. I supported him for a couple of years already.

Did you vote for him?

I never disclose who I vote for, but I will say that I am a registered Democrat. I’ve always been a Democrat.

You have an old-school phone with a flip.

That’s true. It keeps me out of trouble. No, I’m joking.