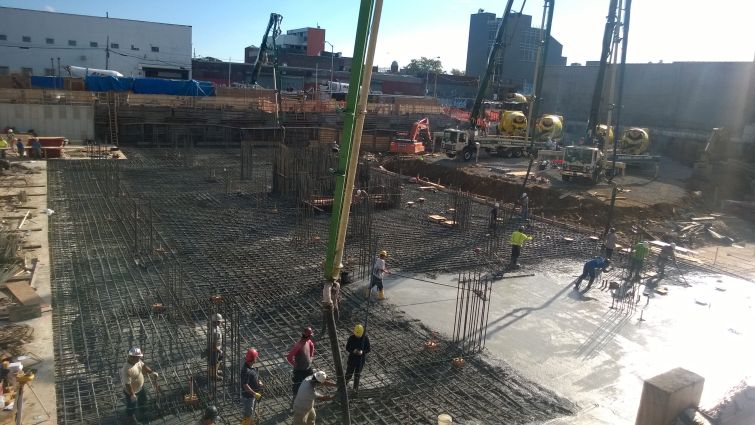 Starting at 4 a.m. yesterday, 2,500 cubic yards, or roughly 9 million pounds, of concrete was poured at the site of Riverside Developers‘ hotel, at 55 Whythe Avenue in Williamsburg, to create the foundation. Alpine and NYCON Supply Corp. transported the concrete in 240 trucks and it was poured via four pumps simultaneously from 12th and 13th Streets. The job was done by 12:30 p.m.

“Because of the unique design of this building, one that will make a signature statement for the area, this amount of concrete was required to provide the necessary structural support,” project architect Nick Liberis of Zoning and Code Consulting Group said in a prepared statement. “It all went exactly to plan. It took a lot of coordination and we also got a perfect weather day to boot!”

A full 2,500 cubic yards is the equivalent of the concrete used to build 83 typical backyard swimming pools.

While the Barclays Center foundation required five times the amount of concrete as the Level Hotel , the Barclays job wasn’t completed in one shot.

The largest continuous concrete pour in the world was 21,200 cubic yards of cement for the foundation laying for the new Wilshire Grand Center in Los Angeles.

“This is a very significant step in a very aggressive development schedule,” said Geoff Bailey of SCG Retail who is leasing out the commercial space at the Level Hotel Brooklyn. “The retail structure should be completed in the beginning of [the fourth quarter] with tenants able to take occupancy by year’s end.”