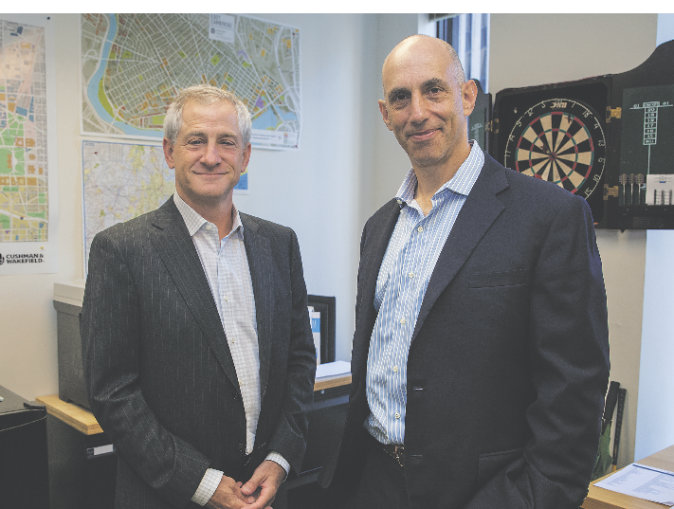 With a direct staff footprint of only five people working in space the company subleases from a law firm in Midtown, ClearRock Properties packs an outsized punch in office markets where big time partners afford the firm a much larger indirect staff. The boutique firm that Doug Winshall, a 53-year-old married father of two, and Steve Grant, a 49-year-old father of two, started five years ago boasts a portfolio of 15 buildings in the northeast, including an assemblage of properties in the South End of Stamford, Conn.’s transit-oriented Harbor Point development and a planned mixed-use residence at 331 N Street NE near Union Market in an upcoming neighborhood of Washington, D.C. But Commercial Observer quizzed the self-described “media-shy” executives on their impressive recent deals in the Manhattan office market and their business approach.

Commercial Observer: Last year, ClearRock and your partner, the Carlyle Group, closed the biggest deal in the country (as measured by price per square foot) for 2013 when you sold 650 Madison Avenue for $1.3 billion to a multi-party partnership that included Vornado Realty Trust and Oxford Properties Group. How did you make that deal happen?

Mr. Grant: Carlyle Group, the majority owner, brought us in as an operating partner with the objective to transform the project from a Class A property that nobody knew anything about to a trophy property. And our objective was to make it, from curb to corner, a place where the most demanding office tenants would feel like it was a good home for them. And so, from the curb area, we renovated the façade. We put in an entirely new lobby. We bought new art. We did new elevators. We redid the common corridors and bathrooms. And then we pre-built some spectacularly beautiful spaces, even putting art on the floors, which nobody had done. So literally from the moment somebody got out of their car until they got to their corner office, it looked spectacular. And then in terms of the sale in 2013 with Eastdil Secured [as the broker], we went to market and it was a very hotly bid project, a lot of interest. And we got the $1.3 billion.

In May, in another partnership deal with the Carlyle Group, ClearRock sold a Flatiron District building at 920 Broadway to KLM Construction Corp. for $117.8 million after purchasing it last year for $58.5 million from Yeshiva University. How did you get such a great return on that investment?

Mr. Grant: A little bit of backstory for 920 is that there was a portfolio of six buildings that were being sold by an estate. The estate had gifted a majority of those proceeds to [Albert Einstein College of Medicine], which is Yeshiva University. So Yeshiva was an owner for a very short period of time. They were never an operator of the property.

They had been 10 percent leased when we bought them, with rents that were at half of market, so the strategy became, not easy, but simple. It was to convert leases to market. And in some cases that required buyouts of tenants, and it certainly required many capital improvements to the elevators and the lobby and the common areas of the building, the façade.

And so 920, being an avenue building, a great set of bones, we were lucky to find that gold and were able to turn it into one of the better buildings, one of the best buildings in Midtown South.

Massey Knakal Realty Services is listing another two properties out of that portfolio at 9 East 38th Street and 14 East 39th Street for $70 million at a site you’re selling with your partner Juster Properties. Can you tell us about that site?

Mr. Grant: Sure. So they’re abutting properties. Together they form a through-block rectangle in between 38th and 39th Streets between Madison and Fifth Avenues. There were unused air rights on one of the two properties, so our objective was to figure out how to create value out of those unused air rights. And what we’ve done is we’ve cleared a big portion of the space in the two buildings so that we’ve created a new development site that we’ll call 14-16 East 39th Street that’s as-of-right hotel or residential development. And, in doing so, we’ve created quite a bit of value in that land, in essence. And then we’re still left with 9 East 38th Street as an office building where we have done a bunch of leasing, and we’re in the process of getting started with doing capital improvements to that building as well.

So your company’s strategy is to buy office building assets, fix them up, then sell them off? Or maybe I am oversimplifying?

Mr. Grant: We do look to buy office properties. We do look to improve them, sometimes greatly and sometimes marginally. And the piece that we were deferring on was the sale portion.

Mr. Winshall: With some of the families, we’ve bought some stuff where the holding period might be forever, but some of the goals are the same. Buy the properties and improve them.

You’re linked with partners like Carlyle, Juster, Contrarian Capital Management, Artemis Real Estate Partners, Square Mile Capital and Homewood Partners. How do you attract and work with so many partners?

Mr. Winshall: One of the things is that Steve and I have both been in the business for 25 years. So a lot of the partnerships are from people that we’ve known. They might have been from different companies, in both of our previous lives, but it was mostly people based on relationships. That’s what we do.

I’d say we’re not out to convince people that they should do office or that they should do New York. So when we’re seeking people, we say, “We’re office guys. We’re primarily focused on the New York metro area.” And, to the extent that the capital partners have an allocation of money or see an investment opportunity in that space, that’s where we come together, as opposed to us going in and saying, “Let me tell you all the reasons why office is great. Let me tell you why New York is great.”

What are your thoughts on the current Manhattan office market?

Mr. Grant: From our perspective, it isn’t so much that it’s a good market or a bad market. It all depends on where you’re sitting. And so if the question is how much more do we see pricing going up, we probably don’t see a huge runway in pricing going up a lot from where it is for office in the markets we’re in. We do see a runway for rent to be going up and we do see a runway for improvement. We still look out at the market and see lots of projects that could use what we do: value added work to make them better.

How did you come up with the idea of starting Clear Rock in 2009?

Mr. Winshall: We first partnered in 1997, and we started a New York office of a public company called [Trizec Properties]. We worked shoulder-to-shoulder for a few years building it up, building the platform that became 100 people, and building the portfolio that became 8.5 million feet in New York. Steve went and worked for Tishman Speyer, where he worked for 10 years, basically, from 1999 to our opening in 2009. I stayed with Trizec until it was sold to Blackstone [Group] and Brookfield [Office Properties] at the end of ‘06. So we were together for those two to three years in the late ’90s building that New York portfolio.

Mr. Grant: Well, we had been talking about this over the ensuing 10 years like, “When are we going to do this ourselves?” And looking for the right time market-wise, and professionally, personally. And, come 2009, the stars aligned for us to put it all together and say, “Let’s go now.”