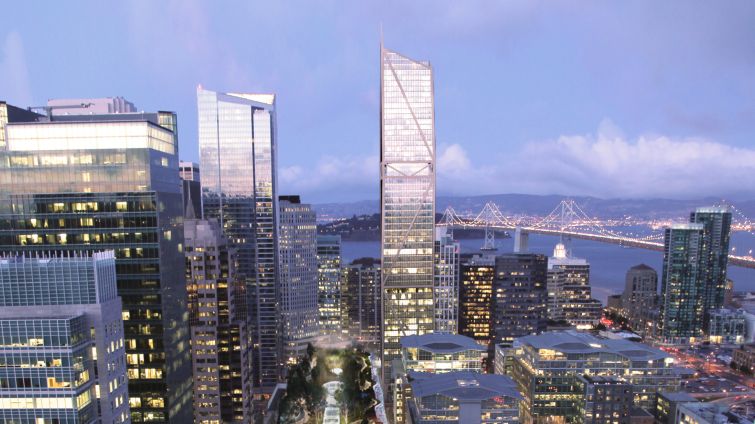 The building will have 400,000 square feet of office space, 65 residential condominiums and a retail component, according to Starwood executives. Construction began last November, according to published reports. At the time, Jay Paul estimated the cost of the project to be $500 million.

The financing, which has a first mortgage and a mezzanine component, is exactly in Starwood’s sweet spot, Boyd Fellows, director and president at Starwood, told Mortgage Observer. As a non-bank balance sheet lender, Starwood was uniquely equipped for the transaction.

“This would be very difficult, if not impossible, for any bank in the United States to do,” he said. Not only would Jay Paul have needed a syndicate of banks to participate in a loan of that size, they would have had to find an independent mezzanine lender. “Just the paperwork, forget the negotiation,” would have been onerous, Mr. Fellows said.

Still, the loan is exceedingly complex. The developer retains the right to condo off portions of the structure and to seek additional financing on those separate pieces of real property, Mr. Fellows said, provisions that took time and effort to structure.

Starwood also structures loans where it originated both a mezz and first mortgage component such that the amount of each are variable, a source with knowledge of their business said. The firm takes that approach because they can then sell off the first mortgage later, in whatever amount appeals to the buyer, while retaining the mezz portion, the source said.

A Starwood representative declined to provide the current amount of the mezz portion, or the rate or term of the loan. Mr. Fellows said the floating-rate loan is Libor-based.

The completed project will have 360-degree views on top floors, creating some of the highest end residential real estate in San Francisco. The lower floors will hold office space—a property type that has seen surging demand in recent years in the Bay Area, as the tech sector has boomed.

Office rents in the area are in “the mid-$40 to $50s a square foot on a triple net basis,” said Anthony Marconi, a vice president with Starwood. That figure works out to between $70 and $80 a square foot when the taxes and other costs are not passed on to the tenant.

The mega loan is one of many larger construction loans Starwood has provided in recent years, Mr. Fellows said—but that is set to change shortly.

The firm, which lent $350 million to The Related Companies and Oxford Properties for phase I of the Hudson Yards last year, is likely to taper its construction lending in the near future.