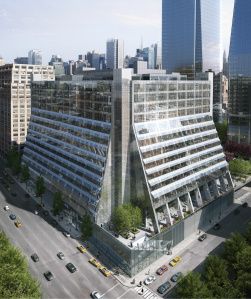 RGA will occupy the entire 12th floor and part of the 11th floor of the building, also known as Five Manhattan West. The asking rents are now between $78 and $80 a square foot, Jeremiah Larkin, executive vice president and director of leasing for Brookfield, told the Journal.

In February, Brookfield unveiled plans for a $200 million renovation of the office tower at 450 West 33rd Street. Scheduled for completion in 2016, the redevelopment of the building will include a new pleated glass façade, a redesigned lobby, upgraded and expanded elevators and enhanced systems. The 1.8-million-square-foot building was acquired by Brookfield in 2001 and will be integrated into the company’s Manhattan West development.