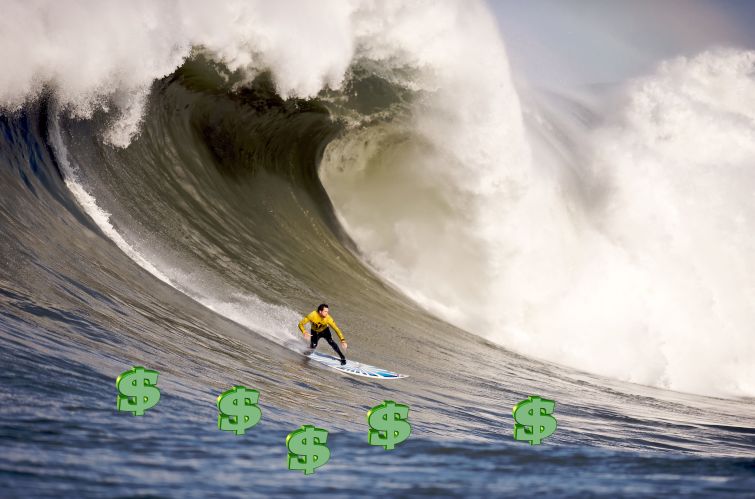 Timing is everything, in surfing and real estate.

Some say that cycles in real estate are inevitable, that the idea shouldn’t be to prevent them, but rather to enter the wave early enough to surf, so to speak. But whatever your thoughts on the market’s boom and bust, recent changes in the commercial mortgage market might give you pause. It may be time to stand up—or bail out.

Many statistics point to a drastic rise in land values in New York City, pushed at least partly by a flood of equity. That, in combination with more leverage and more building trades, indicates what brokers like to call “frothiness.”

“There is definitely a bubble in values, in credit spreads,” a principal at a major New York City lender said. “We’re in lofty times,” said the source, who asked to remain anonymous.

Land values and trade volume are up, with 108 percent more investment sales in the first quarter of 2014 than in the same quarter of 2013, according to data from Massey Knakal Realty Services. Investment sales are on pace to set a record this year, and pricing for core assets across the five boroughs was up 14 percent to an average of $444 per square foot, Massey Knakal data shows.

Meanwhile, and perhaps more importantly, the proportion of loans that are for land acquisition, as opposed to refinancing, has tripled, according to data provided exclusively to Mortgage Observer from Eastern Union Funding, a mortgage brokerage based in New York.

In the third quarter of last year, about 16 percent of the deal volume handled by Eastern was in acquisition loans, said Matt Matilsky, vice president for communications at the firm. In the second quarter of this year, that figure jumped to 36 percent. Refis, which were 84 percent of transactions, fell in direct proportion, and could fall further in October, when rates may finally increase, as quantitative easing is, at long last, itself eased.

“Acquisition financing is highly correlated with sales volume, tending to rise a little faster when sales volume is going up because it coincides with higher loan-to-value ratios as well,” said Dr. Sam Chandan, a real estate economist at the University of Pennsylvania’s Wharton School (and a columnist with Mortgage Observer). The prevalence of interest-only loans, another harbinger of froth, are also on the rise, he said.

But cap rates, as we all know, remain very low. With most transactions showing cap rates around 3 percent but sometimes as low as 2, “they just don’t make sense,” unless an investor wants to hold the asset for 25 years, said Nat Rockett, an executive vice president in the capital markets group at Cushman & Wakefield.

“Rock-bottom cap rates on New York sales are masking the extent of leverage,” Dr. Chandan added. He has also observed eroded lending standards, with lenders “underwriting to prospective income in excess of in-place income [and] underwriting older, less competitive assets on assumptions that are not well differentiated from the newer, more competitive assets,” he told Mortgage Observer via email.

So why all the activity? “I just think there is a huge equity bubble right now that is driven mainly by demographics,” Mr. Rockett said. Baby boomers struggle to find investments that meet their retirement needs and the city is also now home to flight capital from all over the world.

“The more unrest in the world, the more people come here,” said Aaron Jungreis, president of Rosewood Realty Group and a prominent investment sales broker. He was not alarmist about an overly exuberant market, however. “I do think [the market is] bubbly, but there are a lot of things that have to happen for it to really burst,” he said. Land prices could easily hit a wall if the bottom were to drop out of the residential condominium market, for instance. But aside from lowered land prices, a condo slowdown won’t create an overall market halt a la 2008. What would be a problem would be if banks stopped lending, he said, though so far that eventuality seems unlikely.

But the strength of the high-end condominium market could easily wane, because it is built on fleeting macroeconomic factors, pointed out Dr. William Wheaton, an economist with the Massachusetts Institute of Technology’s Center for Real Estate. The Gary Barnetts and Zeckendorf Brothers are “building for a very small slice of the market,” Mr. Wheaton said. It’s not a traditional residential market, but actually the second home market—a sector that is the first to fall during an economic downturn.

Of course, no one can predict the future. Even before the death of Lehman Brothers, many alarms were raised, and none heeded (except by those lucky hedge funds that shorted the right things). And as Mr. Rockett said, the industry is “looking for the same thing again,” in this cycle.

Alas, “the thing that always gets you is the thing you aren’t expecting.”