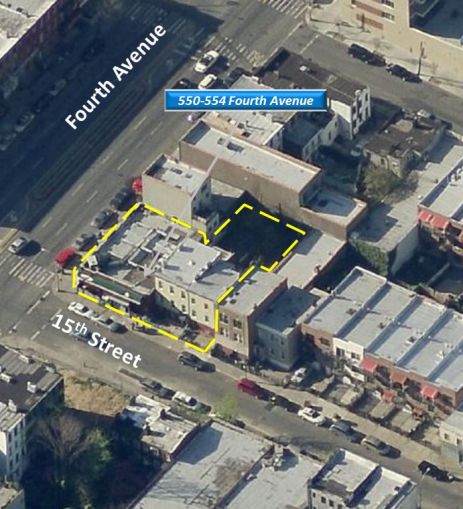 Brooklyn-based Brookland Capital has scooped up a Park Slope development site at 550-554 Fourth Avenue at the corner of 15th Street from three different sellers for $7.4 million.

Brookland is plannning to erect a new 13-story condominium with 45 residential units plus retail on the ground floor at the site, said Boaz Gilad, a partner with Brooklyn Capital. The developer hired New York-based architecture firm Roart to design the building. Twenty percent of the condo units will be affordable, Mr. Gilad said.

The deal was an assemblage of five tax lots, including 138-140 15th Street, with a footprint of 7,032 square feet, and 50,632 buildable square feet with inclusionary housing, according to a news release from TerraCRG. TerraCRG’s Ofer Cohen, Melissa DiBella Warren, Peter Matheos, Dan Marks, Michael Hernandez and Joseph Terzi negotiated the deal.

There is an existing grocery store and two frame residential buildings on the property. The buildings are vacant.

Brookland is no stranger to Brooklyn with “46 current projects in Brooklyn right now,” Mr. Gilad said. The firm recently completed a condo at 708 Degraw Street, has a condo under construction at 467 Union Street and has one in the planning stages at 98 16th Street.