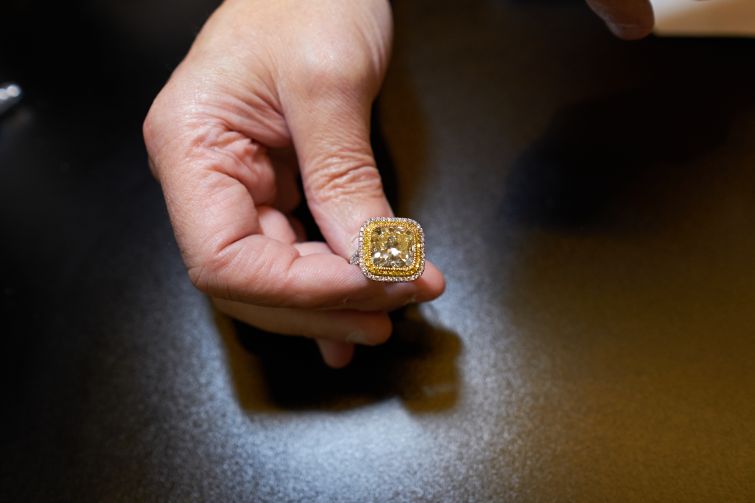 In a vault in the middle of the stretch of West 47th Street between Avenue of the Americas and Fifth Avenue that’s known as the Diamond District, a longtime merchant keeps his literal crown jewels: a set designed in the 18th century for the French royal family. The jewelry salesman and collector places the value of the tiara, bracelet, necklace and earrings with origins in the Bourbon-Medici clan at $1 million, but those jewels are not for sale, he says. He says he plans to donate the piece to a museum someday, and his employees show off less pricey merchandise like a $650,000 choker and a $565,000 necklace. If those items seem too expensive, a store employee tells Commercial Observer, he’s happy to point out items that sell for closer to $500,000.

But that retailer represents just one participant in the one-block district’s vast network of jewelry retailers, dealers, designers, makers and manufacturers who produce the lion’s share of New York State’s top three exports—diamonds, gold and jewelry, according to census data. And Robert Hadi of ABS Partners Real Estate navigates that stretch of mind-bogglingly high-end businesses to the tune of closing 50 lease deals in each of the last three years, he says, with a protective concern for both the area’s diverse group of tenants and the economic impact of the thriving street with 20 jewelry exchanges and two foreign trade zones.

Mr. Hadi invited Commercial Observer to an exclusive tour of spaces on 47th Street ranging from individual booths on the floor of the mall-like exchanges to workshops and showrooms far removed from the bustling street to Gülaylar Group’s recently opened three-floor commercial condo in Extell Development Company’s International Gem Tower. And the broker, for whom the businesses and the people behind them are every bit as precious as the expensive metals, clearly has established a rapport with the cosmopolitan mix of tenants who make up the district.

“They have their own way of negotiating that’s different from most American tenants,” Mr. Hadi said of the district’s largely immigrant merchants. “And a large percentage of my negotiating is listening to them. I’ve managed to develop strong, meaningful relationships with these tenants.”

These business owners enjoy a meaningful relationship with the city’s economy. The district features 4,100 companies with 22,300 employees, according to a 2011 study by the Pratt Center for Community Development and the Fiscal Policy Institute that the 47th Street Business Improvement District and the state commissioned. Jewelry businesses in the city, most of them based in or around the district, account for a whopping $24.1 billion in annual economic impact, the study found. And workers in the industry—70 percent of whom are immigrants and nearly half of whom have a high school education or less—earn significantly higher wages than their counterparts in other industries while fostering more jobs in related fields like transportation and security.

The jobs, with average yearly salaries of $54,662 in manufacturing, $57,202 in wholesaling and $59,722 in jewelry retailing, according to the study, and the supportive positions they create make the area loom large to the labor-minded research institute, said James Parrott, the organization’s deputy director and chief economist.

“For every 100 employees directly involved in the sector, there are 100 jobs in other sectors; that’s one of the top-five employment multipliers in the city,” said Mr. Parrott. He added, “It’s a sector that has an economic impact that is outsized considering it takes place within one city block.”

On the day Commercial Observer visited the district, wide-eyed tourists mingled with plugged-in industry professionals on the crowded sidewalks while suited security guards and eager salespeople stood outside the many shimmering storefronts. The frenetic street constitutes the city’s third iteration of the Diamond District after previous locations dating to the 18th century, and the current home of the district processes 95 percent of the jewelry that’s sold in America, said Michael Grumet, the executive director of the 47th Street BID.

New York’s diamond trade migrated uptown to 47th Street starting in the 1920s. But it really picked up following the Jewish exodus from Europe during and after World War II. (The district and industry are closely associated with the city’s Hasidic community). The earliest iteration of a New York diamond district was on Maiden Lane four blocks north of Wall Street.

“It truly is the place of the American dream,” Mr. Grumet said. “If you want to find any language in the world spoken, you will find it here. People learn trades, they form businesses and then they pass them on.”

Mr. Hadi serves alongside Mr. Grumet as the BID’s treasurer. The 56-year-old father of one and four-year ABS broker was born in New York City but he grew up and studied law in London, where his father ran a carpet-dealing business. He returned to New York as a young man and worked in property management for several years before he found work as a leasing agent for the owner of one of the district’s exchanges. At that point he learned how to negotiate renewals with the occupants of the booths where jewelry merchants pitch their wares. ABS later tapped him to find tenants in what was then its exchange and office property on the street and he filled the nearly half-empty building within two years.

“Robert very much stabilized that building,” Mr. Grumet said. “He did that with his gentlemanly manners and indomitable spirit.”

“It’s changed everything, you can’t compare it to anything on the street,” he said, noting rare-for-the- industry speculative leases in the mall with the prime ground-floor location. “I put in a few tenants that actually signed before this was built.”

Stephen and Cathie Baron of Baron Jewelry moved into a snug 250-square-foot mezzanine-level office this year after occupying the same space on the block where Mr. Baron’s father, an Austrian immigrant who fled the Nazis, opened the business 60 years ago. The proximity of other jewelry industry professionals makes it feasible for the Barons to fill orders like that of a husband who visited the store in need of a 60th birthday present for his wife with only a week’s notice. The Barons customized a nine-carat diamond ring in less than three days and sold it to the man for $300,000, Mr. Baron said. The couple had thoughts of retiring before they ultimately elected to take a mall space, his wife said.

“We decided, why not make the last five or 10 years go out big?” said Ms. Baron. “So we came over here and we couldn’t be happier. It worked out great and it was definitely worth the investment.”

Nearby, at 20 West 47th Street, a husky security guard checked IDs before Mr. Hadi knocked on the door of jewelry shiner Levon Aramagan’s workshop on a basement floor, where the artist for the Arma company (motto: “Jewelry shines by trend-setting Levon”) uses pricey equipment to burnish old pieces. Down the hall, Russian transplant Slava Batsoula, 51, showed off the fleur-de-lis-enhanced silver jewelry he’s been designing, cutting and selling out of the district since 1991.

Mr. Hadi took the structure from 85 percent empty to 100 percent full, he says.

But he declined to state any asking rents for spots in the Diamond District and asked Commercial Observer not to publish details about the businesses with the most expensive jewels out of safety concerns for the business owners, he said, despite the block’s pronounced security. The U.S. Department of Homeland Security supports the BID with a grant (the only BID in the city that’s so endowed), security cameras monitor the street at all times and insurance companies require many of the businesses to hire plainclothes security details, Mr. Grumet said. Yet Mr. Hadi, who greeted the many business owners and employees on the block as old friends, clearly worried that the publicity could bring unwanted attention to them.

“When I do a deal, big or small, I can’t say anything because of the security,” he said. “Details of specific deals are not disclosed.”

Regardless, the district will continue to attract shoppers and business owners alike. The industry’s ability to produce expensive consumer goods and supplies for far-reaching industries like fashion, entertainment and hospitality without taking up very much space will help it maintain its strength, experts say, and the merchants agree.

“The advantage is that you’re at the center of the jewelry trade in the world,” said Michael Kricheli of Lanetti & Co. from the company’s space at the new mall. “You’re right here where all the action is.”