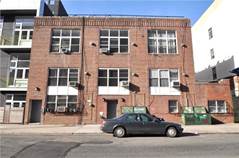 Marcus & Millichap is asking $14.5 million, or $450 per square foot, for a 25-unit, 32,228-square-foot converted loft rental apartment building at a former factory at 60 Stagg Street in East Williamsburg, Brooklyn, Commercial Observer has learned.

Shaun Riney, James Saros, and Michael Salvatico of Marcus & Millichap’s Brooklyn office are marketing the 1950 structure near that changed into residential units of 710 to 1400 square feet roughly ten years ago.

“The property at 60 Stagg Street presents a rare opportunity to own a completely free market 25-unit building that stretches an entire block in a strong East Williamsburg location,” Mr Saros said in a prepared statement. “Neighboring developments are achieving rents of approximately $55-$60 per square-foot, which demonstrates the substantial upside that can be captured in the properties’ income.”

The brokers declined to disclose the name of the seller, who they say is a private investor. Scholes Street Properties bought the building in 1998, according to city property records.