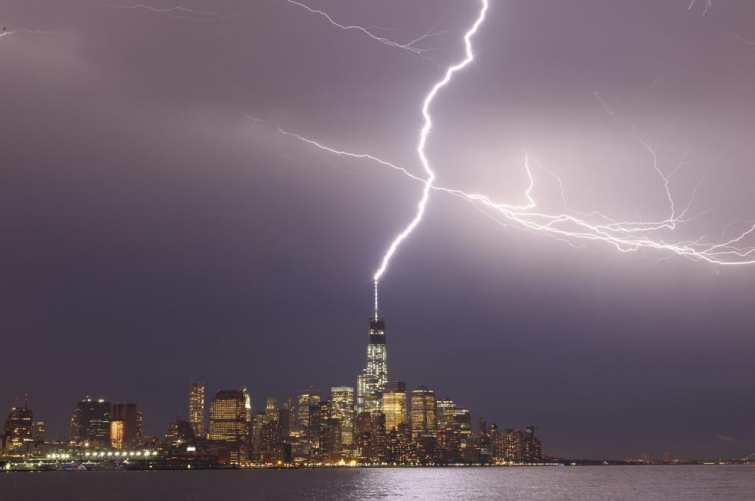 One World Trade Center gets hit by lightning during a storm tonight. #newyork#newyorkcity@nyc@newyork#lightningpic.twitter.com/qGPyBzKudp

SEE ALSO: Sunday Summary: The 1 Million-Square-Foot-Plus Lease Is Back!!

A week after photos of lightning striking the steel spire of One World Trade Center made international news, experts familiar with the electric bolts pointed to the building’s resilience against such dangers.

“That building inherently has lightning protection,” said Mr. Cooper, whose company implemented lightning safeguards at the Plaza Hotel, John F. Kennedy Airport and several towers around the city, though not at 1 WTC. “The needle on top is exposed structural steel that’s attached to the structural steel core of the building, which goes all the way underground. Lightning protection is built into that structure.”

Skyscraper owners usually spend between $50,000 and $100,000 on their lightning protection systems, said Mr. Cooper, who calls the end of June through early September “lightning season” and notes that taller buildings face a greater risk. Lightning strikes caused 23 deaths, 145 injuries and $23.8 million in damages in the United States last year, according to the Insurance Information Institute, an insurance industry research organization.

But safeguards like rods and copper cables neutralize the bolts by transferring their “mega-electricity” to the ground underneath buildings, said Kim Loehr of the nonprofit Lightning Protection Institute.

“The worst-case scenario is fire,” said Ms. Loehr. But, she noted, “There’s a lot of apathy. Lightning’s striking all the time.”

Representatives for the Durst Organization, the developers of 1 WTC, acknowledged last week’s strike wasn’t the building’s first, but said no figures for the number of strikes or officials tasked with lightning protection were available.