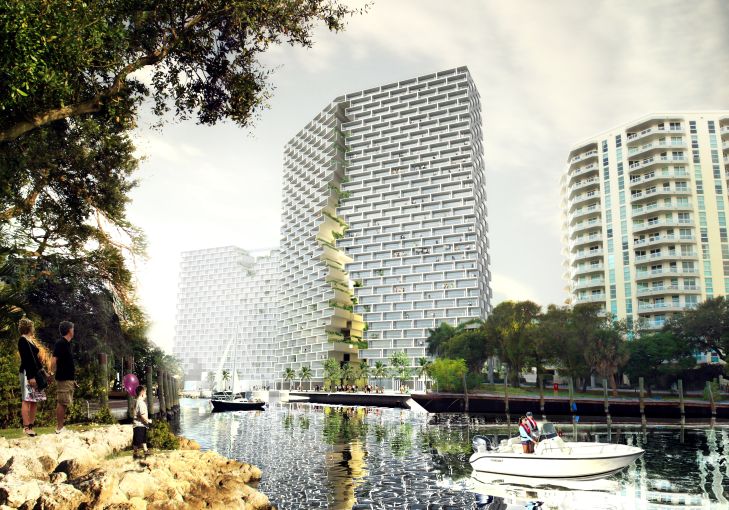 Designed by Danish architect Bjarke Ingels, the project will be constructed in three phases. The completed Lego-like towers will contain 856 condominium and rental units, several restaurants, a dozen retail shops, and a marina with over 200 wet and dry slips.

Total project capitalization for the three phases is approximately $230 million, according to DTZ Real Estate Investment Banking Group Managing Director Jeffrey Donnelly, who leads the division out of New York.

The project’s mix of residential units mitigates risk by catering to both rental and condo demand in the “recovered and now booming Fort Lauderdale market,” Mr. Donnelly noted. The towers are designed to appeal to both young urban renters as well as potential condo buyers from the U.S., Latin America, Europe and Asia.

“Marina Lofts is a truly groundbreaking design conceived by young, emerging ‘starchitect,’ Bjarke Ingels,” Mr. Donnelly said. “The project incorporates the best attributes of the river location and marina amenity into a cool, edgy, sexy project that brings a Miami and international vibe and sensibility to downtown Fort Lauderdale. This three-tower development quite literally transforms the skyline of downtown Fort Lauderdale.”

“While similar projects in Fort Lauderdale have been mired in litigation and resistance from anti-development groups, Cymbal Development was able to navigate the hurdles and obstacles to achieve entitlement and approval by demonstrating to the community that its project was the highest and best use for this rare, six-acre infill site,” said DTZ Real Estate Investment Banking Group Vice President Joel Weinberg.

The first phase of construction is expected to begin in the next six months, according to the brokers.