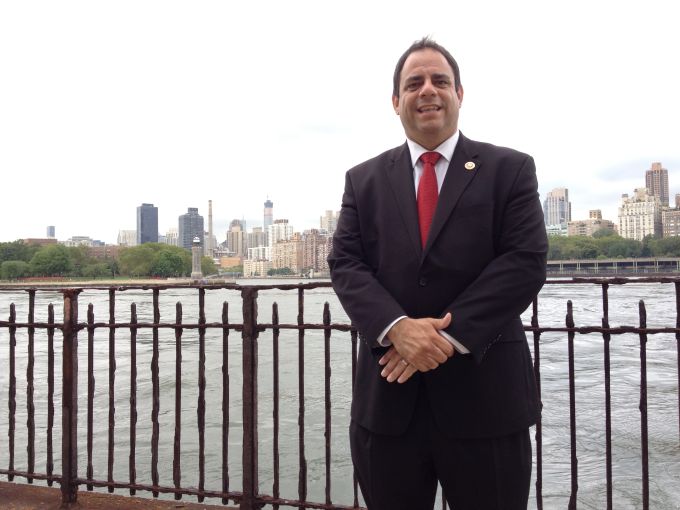 As the 2.2-million-square foot Astoria Cove proposal winds its way through the city’s Uniform Land Use Review Procedure, Council Member Costa Constantinides, a Queens Democrat who represents Astoria and parts of Woodside, East Elmhurst and Jackson Heights, laid out how he would judge the planned mixed-use development for Commercial Observer during an exclusive tour of the 8.7-acre-site overlooking Pot Cove on the East River yesterday.

The first-term council member whose vote will inform that of his colleagues once the project reaches the City Council later this fall dished on his hopes for a new ferry route from the site to Manhattan and spelled out how he’s pushing for the project to maintain his native Astoria’s character while changing the neighborhood for the better, but he’ll have to navigate turbulent waters among the many parties that wield influence in the city’s land use proceedings while managing the always-tense affordability component of the proposal.

“This is an opportunity; if done correctly, it’s going to transform the waterfront, but it has to be done correctly,” Mr. Constantinides, 39, said as he greeted constituents at the nearby Astoria Houses public housing complex. He added, “It’s definitely a process. We’re talking with everyone to make sure everyone has a voice and that the developers hear that voice.”

An investor group called “2030 Astoria Developers LLC” that includes the Long Island City-based Alma Realty Corp. has already promised public benefits from the development and adjusted its proposal after Community Board 1 voted 44-0 against the proposal on June 24 in an advisory ruling. The developers upped their affordability ratio to 20 percent from an earlier proportion of 17 percent and committed to funding new public open space elsewhere in the area in addition to the 83,846 square feet of public open space already planned for a waterfront esplanade and new streets approaching the cove. They also aim to build a 456-seat elementary school and 109,470 square feet of retail sites, including a 25,000-square-foot supermarket.

The developers’ representative in the ULURP negotiations, Howard Weiss of Davidoff Hutcher & Citron, notes that the developers are now utilizing a city program that allows them to build out a total of 1,723 units while requiring that at least 20 percent of the floor area–about 345 units–be affordable. The development group has declined to use any public financing to subsidize the units but they agreed to increase the overall number if they request the public financing, Mr. Weiss said, expressing confidence they would eventually win Mr. Constantinides’ approval.

“It’s been very productive working with him,” Mr. Weiss said. “We met several times with him and we’re in constant communication. We expect, when this reaches the Council, it will have his full support.”

Mr. Constantinides agreed that the developers have shown willingness to compromise thus far in the process. But though he noted that possible new grocery stores both at Astoria Cove and at Lincoln Equities Group’s adjacent 2,644-unit Hallets Point development that passed ULURP last year would be the neighborhood’s first new supermarkets in two decades, the former Council staffer cited preserving the neighborhood’s commercial context as a key indicator on his potential support.

The lawmaker noted that the project would expand the street grid and open a portion of the waterfront that’s now cut off by the industrial businesses that still dominate the project site. But he wants to enhance the coastline further through a commuter ferry or at least an eco-dock where fishing enthusiasts from Astoria Houses could cast lines and local schools could hold educational programs. A weekday route connecting a new terminal at Astoria Cove to new installations on Roosevelt Island, and in Long Island City, Midtown and Lower Manhattan would cost $2.7 million in annual subsidies and $23 million in capital costs, the city Economic Development Corporation found in a 2013 study. But the quicker commute from the site that’s a 15 to 20-minute walk from the nearest subway would be a worthwhile investment, Mr. Constantinides said, noting that last year’s Hallet’s Point rezoning commissioned a $500,000 feasibility study of a new ferry dock on the site.

“I’m committed to bringing a ferry here,” he said, pointing out a tattered landing pier that juts into the East River. “A ferry transforms this peninsula. Nobody has made a credible argument that the ferry is not a good idea.”

Rather, the number of affordable units on the site has represented the most contentious issue of the rezoning negotiations thus far. The Real Affordability for All Coalition, a group of almost 50 advocates and unions, is calling for at least 50 percent of the new housing to be affordable, a level that Mr. Weiss says would make the project unfeasible for the developers. But the coalition, whose members contend that the site’s potential 421-a tax abatement would allow the developer to pay for the affordable units, is making its presence known at each stage of the rezoning, such as a recent press conference where Mr. Constantinides appeared alongside the leaders of the movement.

“I get the sense that he has the same goal that we do–to keep the Astoria area intact,” said Jaron Benjamin, executive director of the Metropolitan Council on Housing. “If you’re going to build affordable housing with tax breaks then we need to get as much out of this as possible.”

Mr. Constantinides has thus far declined to focus on any particular number, though he notes the centrality of affordable housing to the debate.

“We’re looking to make sure there’s an appropriate number,” he said. “I don’t have a magic number. Of course 345 is better than 295, but I’m not saying there’s an end-all number.”

Wiley Norvell, a spokesman for Mayor Bill de Blasio, said in an email that the Administration is watching the process closely and noted the developers’ plans to build the affordable housing without the normal public financing for the units.

“This is the developer’s proposal, and it’ll take some time to determine how well what’s being proposed meets this community’s needs,” Mr. Norvell said. “But there’s no question we’re seeing a shift in the landscape when developers are willing to require themselves to build affordable housing and forego public subsidy for the required affordable component.”

With Queens Borough President Melinda Katz expected to submit her recommendations on Astoria Cove soon, the matter will then shift to a City Planning Commission hearing scheduled for Aug. 6 before the proposal moves to its decisive up-or-down vote in City Council this fall.