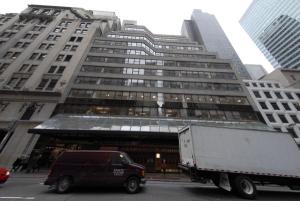 The second floor of the Cohen Brothers Realty Corporation-owned building will serve as the luxury womenswear brand’s new headquarters. Asking rent for the space was $50 per square foot.

“For [Mr. Posen] the location was everything,” Marc Horowitz, a senior vice president and director of office leasing for Cohen Brothers, who represented the building’s ownership in-house, told CO.

Mr. Posen plans to move the luxury brand from 13-17 Laight Street in Tribeca to the new space between Fifth and Madison Avenues in the final quarter of this year, according to a statement.

“We’re delighted that one of the industry’s up-and-coming young designers has chosen 3 East 54th Street, one of the most prestigious office locations in midtown, for its new Manhattan offices,” Charles Cohen, the president and chief executive of Cohen Brothers, said in a prepared statement. “Our building is ideally located near boutiques and major department stores where Zac Posen’s luxury apparel and accessories are sold.”

The stability of the building’s ownership, along with an impressive roster of additional tenants, were further draws for Mr. Posen, Mr. Horowitz said, adding that Cohen Brothers is “a landlord that likes to be known by the company we keep. [Zac Posen] is a perfect tenant for us.”

Mr. Posen’s designs are sold in over 40 countries outside the U.S. and worn by celebrities including Natalie Portman, Cameron Diaz, Mischa Barton and Jennifer Lopez, among others, according to a statement regarding the transaction.

Remaining lease availabilities in the 20-story, 200,000-square-foot building include 12,000 square feet in the tower and 15,000 square feet over a few floors in the base of the building, Mr. Horowitz said via a statement regarding the transaction.

The tenant was represented by Marc Schoen and Brian Neugeboren of Savitt Partners, who were not immediately available for comment.