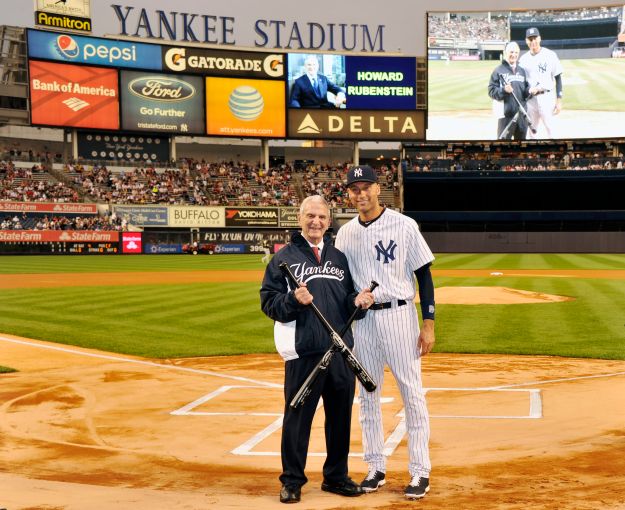 Yankees shortstop Derek Jeter, manager Joe Girardi and the team’s general partner Jennifer Steinbrenner Swindal presented the veteran of the PR field with bats autographed by Jeter and Hall of Famer Yogi Berra, balls signed by Tino Martinez, Jorge Posada and Paul O’Neill and a 14-carat gold ring with the team’s logo on it.

“The Yankees are proud to honor the legendary career of one of the nation’s best known public relations specialists, Howard J. Rubenstein, as he celebrates 60 years in business tonight,” public address announcer Paul Olden told the crowd of 41,677 prior to the Yankees’ 5-2 loss to the Oakland A’s. “New York’s go-to PR man, Howard started his own agency at his mother’s kitchen table in Brooklyn in 1954. Today, his agency has hundreds of clients.”

Rubenstein has handled the Bronx Bombers’ public relations for the past 30 years, and, while officials at Rubenstein Associates said he was unavailable to talk about the highs and lows of representing his diverse client base for all these years, executive vice president Steve Solomon says Rubenstein takes a personal approach with the Yanks.

“He’s enjoyed a remarkable relationship with the Steinbrenner family,” said Mr. Solomon. “He was very close to George Steinbrenner when the boss was the boss.”

Public relations pros echoed the Yankees’ praise of Mr. Rubenstein’s work on behalf of the always-controversial and always-interesting client he has represented all the way from the last-place days of the 80’s to the more recent World Series victories and the opening of the new Yankee Stadium. Kelly Kreth of Kreth Communications said the upside for such a client is that there’s no problem getting news coverage.

“The really big downside is that there’s more room for crisis management because they’re so in the public eye,” Ms. Kreth said. And, she added, “The average business you represent is probably not as polarizing as a sports team. So I would think that reporters would be very interested in playing up that controversy.”

“Howard Rubenstein is one of the finest people I have ever known,” said Linda Alexander of Alexander Marketing, who recalled his advice to turn down clients who aren’t trustworthy. “He really sets the standard for the industry.”