Upgrading NYC: 32 Avenue of the Americas 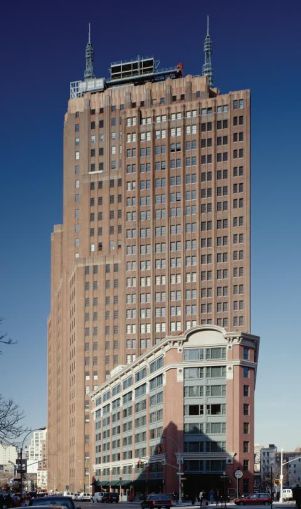 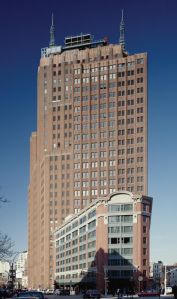 “Upgrading NYC” is a new series sponsored by AT&T in which we interview owners of and tenants in Manhattan commercial buildings that have recently upgraded their wireless connectivity. First up is Rudin Management’s 32 Avenue of the Americas, which has just entered into a 20-year lease with data center provider Telx.

In 1999, Rudin Management purchased 32 Avenue of the Americas, formerly a critical telephone hub for AT&T that in 1956 had linked European and North American phone lines for the first time through wire. With the intention of continuing its legacy as a telecommunications center, Rudin hired the architecture firm FXFOWLE to redesign the 1.1-million-square-foot property’s interior to host new wireless technology.

The landlord spent about $100 million and 18 months on interior construction, said John Gilbert, the chief operating officer of Rudin Management. It also gained Landmarks Preservation Commission approval to install two radio towers atop the landmarked building, which was designed by architect Paul Walker.

The building’s 28,000-square-foot connection center, known as the HUB, is located on the 24th floor. The facility has data storage services through custom-built cabinets and cages and also has a “meet-me” room that can physically connect different companies’ networks.

The HUB is a “lynchpin between broadband wireless and broadband terrestrial,” said Mr. Gilbert. It hosts about 50 terrestrial carriers and a mix of content, Internet service and wireless providers.

The property’s 15-foot ceilings and pre-existing infrastructure, along with Rudin’s upgraded fuel storage and electrical systems, make it more suitable for providing such services compared to most New York buildings, which typically don’t have the power capabilities or storage space.

“There are very few buildings that can do what 32 does,” said Mr. Gilbert.

Networking ability has also paid off for 32 Avenue of the Americas’ office space. The building is 98 percent leased with tenants including telecom providers, advertising firms, a media company and a publishing press.

Data center provider Telx has partnered with Rudin for the next step in the building’s evolution. Last August, Telx signed a 45,000-square-foot lease for 20 years on the building’s 10th floor. It plans to create a new connectivity center in the building set to open in July. Telx is also now managing the 24th floor HUB.

Telx is seeking to add connections between wireless and mobile providers in its new facility.

“Our objective and goal has been to grow in the mobile space,” said Anthony Rossabi, the senior vice president of Telx.

Potential clients for the 10th floor data center include over a dozen financial service companies, cloud computing companies, mobile network operators and cable companies, said Mr. Rossabi. Clients will include both existing companies inside the building and outside companies. He declined to give the cost, but said construction will take a total of about six months.