Lenders Speak Up About Rent Guidelines Board Decision 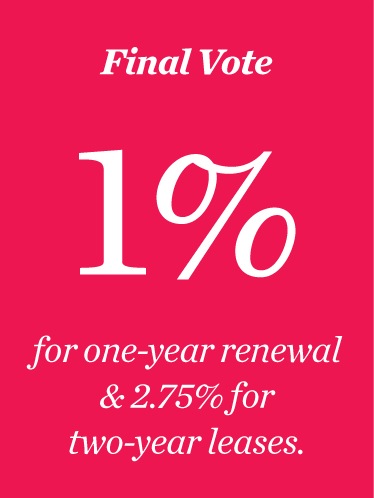 Following this week’s vote from the city’s Rent Guidelines Board against a rent freeze on rent-stabilized apartments in the boroughs, Mortgage Observer spoke to several real estate lenders and brokers to gauge their reactions on the final decision. In the end, the board voted on a 1 percent increase for one-year renewal leases beginning on or after Oct. 1., and a potential 2.75 percent increase for tenants who opt for two-year leases.

Our primary question to those willing to comment: does a 1 percent rent increase for one-year renewal leases cause concern about the financial bases for multifamily properties that rely on certain rent prices to cover costs? “I believe, psychologically, 1 percent makes a big positive difference,” said George Klett, executive vice president and chairman of the commercial real estate committee at Signature Bank. “Owners would have obviously liked a bigger increase, but the fact that it isn’t a ‘freeze’ and it is one percent only until next year—owners are probably breathing a sigh of relief. Bank analysts are also looking at it in a positive aspect.”

Another executive at the real estate lending arm of a New York-based community bank, who asked not to be identified, echoed that sentiment:

“One percent is better than no percent,” he said on background. “Given the fact that you had decent rent increases in years gone by, a smaller increase might be ok for the time being, especially in light of what looked like a request for zero percent. Unfortunately expenses always increase, so what do you do?”

Others in commercial real estate finance expressed deep concerns about the final vote from a cost-coverage perspective and the implications for Mayor Bill de Blasio politically.

“There are two aspects to my thoughts on this. First of all, it’s not going to cover simple inflation,” said Matthew Galligan, president of CIT Real Estate Finance.

“The other part is that to my understanding the mayor was in complete control of this,” Mr. Galligan added. “The thing that could be damaging for him politically is that he is effectively advancing a very liberal agenda on a part of the equation that is very small for the overall context of real estate in the city. I thought the mayor would have bumpers around him, since the real estate industry is such a large contributor to his campaign. He’s potentially inflaming the people that he needs to get stuff done.”

Abraham Bergman, managing partner at the New Jersey-based brokerage firm Eastern Union Funding, also noted that the decision neglects the reality of rising costs, but added that the real estate community has other tenable revenue sources.

“Real Estate in New York remains strong, but owners are upset by this minimal increase,” Mr. Bergman told Mortgage Observer. “They feel that the city is underestimating the increases to operating costs of properties. Still, the owners are constantly renovating units and giving them other opportunities to increase rent, and they will continue to be bullish about real estate in the city.”

Several major banks that regularly lend on rent-stabilized multifamily housing in New York City, including Capital One and Wells Fargo, declined to comment for this story.