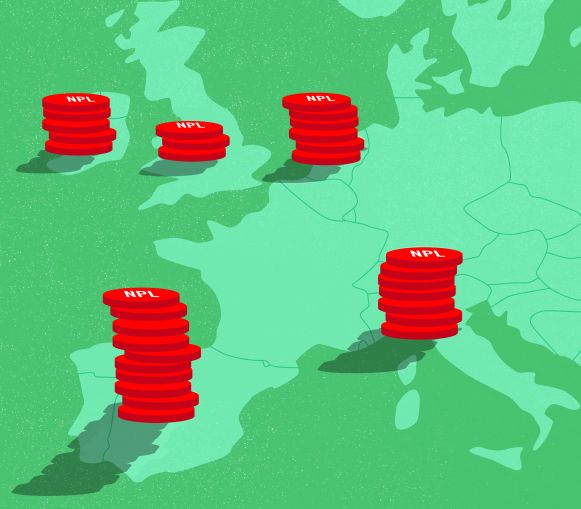 The nonperforming loan market in Europe is moving south.

Rome wasn’t built in a day. For many European financial analysts that maxim is the more cautious analog to the Wall Street adage Your first loss is your best loss.

Indeed, the two sayings capture well the contradictory responses to the financial crisis that have been taken on both sides of the pond.

In the U.S., nonperforming loans (NPLs) quickly went on the market in order to help eliminate losses from lenders’ balance sheets. With the start of the recovery, the NPL market started to lose steam and opportunistic buyers started to look to Europe—just as banks were beginning to sell.

Since at least last year, Europe has been the place to be for sophisticated international real estate investors looking for a relatively safe market—and one with more competitive yields than that of the U.S. Of late, it has officially become the hottest market for NPLs and is now the battlefield on which U.S. funds have been duking it out to achieve the largest and most profitable NPL portfolios. The frontline is only due to widen to include other, untapped European markets.

The mood in the European real estate market has clearly changed. A recent Ernst & Young survey among European investors showed that in all European countries the majority of respondents saw their countries as attractive investment destinations. In Spain and Italy—countries hit hard by the euro zone debt crisis—84 percent and 61 percent of the respondents, respectively, said their country was a good destination for investors. In late 2012, such positive views were in the minority, the report said.

In just the first quarter of 2014, the volume of closed NPL transactions in Europe had reached €23.9 billion, just shy of the €30.3 billion recorded in all of 2013, according to data from Cushman & Wakefield. By the end of May 2014, the total volume of NPL transactions in Europe reached €38.6 billion, said Federico Montero, a partner at Cushman & Wakefield’s EMEA corporate finance team.

“It’s amazing,” said Mr. Montero. “The European real estate loan sale market could reach its peak in 2014 as activity soared in the first few months of this year.”By the end of summer—which is usually the slowest season in Europe—the volume of NPL transactions will reach approximately €48 billion, he forecast. For the entire year, total transactions could rise to €60 billion, he said.

The biggest buyers of distressed property in Europe are U.S. opportunity funds, particularly in the loan sale area, said a recent report by Real Capital Analytics, which identified 84 percent of the buyers of NPL portfolios in Europe as American in 2013.

The average size of deals has been larger than in the past and has affected the total volume. The average outstanding principal balance of 38 transactions monitored by Cushman & Wakefield between January and April of 2014 was €784 million, up from a €360 million average in 2013.

So far, the U.K. and Ireland have been the most active NPL market on the continent, accounting for approximately 72 percent of all closed sales between January and April of 2014, according to the Cushman & Wakefield report. This is at least partially due to the fact that the Irish government’s “bad bank,” NAMA (National Asset Management Agency)has a mandate from the Irish government to acquire and liquidate Irish bank loans.

So-called mega deals—which have a volume of over €1 billion each—have dominated the European market since the beginning of the year. Irish Bank Resolution Corporation (IBRC) has exceeded expectations and has so far been the most active seller of 2014, with sales of approximately €19 billion.

The last tranche of its remaining €2.5 billion in loans is expected to be marketed soon, according to a progress report the IBRC liquidator presented to the Irish Department of Finance in June. It includes around 6,500 residential mortgages that are worth approximately €650 million, €1.4 billion of commercial property loans and €400 million of corporate loans to Irish businesses. Potential bidders are already looking carefully at these portfolios, though bidding has not begun.

Other notable transactions include NAMA’s sale of the so-called Project Eagle, a portfolio of €5.6 billion U.K. and Irish NPLs, to Cerberus Capital Management, LP and the so-called Project Tower, a portfolio of €1.1 billion Irish NPLs, to The Blackstone Group. Those U.S. funds overcame competition from other U.S. bidders, including Pacific Investment Management Company, LLC (PIMCO) and Davidson Kempner Capital Management.

Indeed, since late 2012, many investors have set up offices across the Atlantic, initially in the U.K. and Ireland. Despite their choice of headquarters, however, the members of the strict pool of private equity players with enough capital and experience to compete for the European mega deals “are very geographically agnostic,” said David Edmonds, global head of portfolio lead advisory at Deloitte LLC, explaining how the scope of the market in Europe, especially on the continent, has increasingly been expanding.

Investors’ attention is now shifting to southern European countries. After snatching up the majority of IRBC’s portfolio earlier this year, Lone Star Funds—by far the most active NPL buyer in Europe in 2014—teamed with JPMorgan Chase and won a very competitive bid for Commerzbank AG’s Project Octopus, the largest portfolio of loans sold on the Iberian Peninsula to date.

“In Spain we were able to take full advantage of the excellent market opportunity, thereby reducing significantly the earnings impact,” Sascha Klaus, a board member of Commerzbank, said in a recent release announcing the deal.

Southern European debt deals appeal to investors because they provide the opportunity to get acquainted quickly with a new market—one that provides better yields when interest rates stateside are at historical lows. “In three months, you are building a portfolio that otherwise you would need five years to build,” said Mr. Montero of Cushman & Wakefield.

Spain is widely considered the frontier of large debt transactions. Blackstone, Cerberus, Apollo, Pimco and George Soros’s Quantum Fund, have already started the next battle, over Project Hercules, a €6.95 billion portfolio of mostly residential mortgages sold by Catalunya Banc SA, a regional lender that the Spanish government nationalized in 2011.

Still, the process has been slow in Spain because, as is the case for most European countries, the government has had to deal with a largely bank-based lending system, as opposed to the varied U.S. system, which includes conduit lenders and financing from life and other insurers.

“Europe is more bank driven than the U.S.,” said Deloitte’s Mr. Edmonds. For this reason, he added, “the effect of the crisis on the financial system in Europe was much more severe. As a result, you end up with a greater level of NPLs.”

Furthermore, compared with the “U.S.’s history of taking quick actions,” said Mr. Edmonds, “Europe’s approach is slower and more cautious.” (This trend has started to shift only recently, according to data from Cushman & Wakefield. The proportion of traditional bank lenders in Europe has fallen from 67 percent in the first quarter of 2012 to 55 percent in the first quarter of 2014.)

The Netherlands is another market investors have started to scout for better yields. The Dutch government has created its own bad bank, Propertize, which has a 10-year mandate to sell the €4.8 billion of commercial real estate loans and investments of the nationalized bank SNS REAAL. Among its most valuable assets are the mixed-use complexes New Babylon in The Hague and Überseequartier in Hamburg.

“There is a lot of interest, especially from abroad, in our portfolio,” said Roland Kroes, the senior spokesperson for Propertize. “If a real opportunity will come, we are keen to consider it.”

Still, there is no rush. The interest is “not yet at the prices we think our real estate is worth,” Mr. Kroes said.

With a general, if slow, rebound from the euro crisis underway, investors are expected to find opportunities for NPLs in Italy, too. According to listed property services group Prelios,Italian banks still own approximately €160 billion of NPLs. But big deals are yet to come.

In the coming months, Milan-based bank Unicredit is expected to sell its property loan management arm UCCMB, which has a €4.4 billion NPL portfolio. Verona-based Banco Popolare is seeking to sell Release, its bad bank unit, which owns and manages €3.2 billion in soured loans and real estate assets. Blackstone and Apollo are among the short-listed bidders for both deals, sources said.

Germany, generally thought of as a safer market akin to the U.K., is a more complex story. German banks, which had large exposure to foreign markets, have in the last two years already proceeded to sell their NPLs abroad. In one of the most notable cases, Commerzbank sold the portfolios owned by its real estate branch, Eurohypo AG. Before the crisis, German banks were very active in lending abroad—in the U.S. in particular—and since the crisis they have been selling the portfolios of loans their foreign branches owned abroad. Commerzbank has sold the portfolio of loans it held, first in the U.S., then in the U.K. and most recently in Spain. But they are keeping their loans in Germany.

“Most of the NPL transactions we have seen have been in other markets,” said Dirk Richolt, head of real estate finance at CBRE Germany. “German banks could not afford to take the risk of losses right away,” he said. But at the same time, backed by the German government, “they could afford to hold loans.”

A recent report by Ernst & Young, which estimated total German NPLs at over €100 billion, said interest in Germany is profound. “Investor appetite for German loan portfolios remains high and a large number of investors are keen to put the funds they have accumulated over the past 24 months to work in Germany,” the report read. Still, analysts who have been more bullish in the past are now uncertain about when to expect large sales in Germany. Rising NPL prices and the return of loan-on-loan financing (financing for the purchase of loans) have shown how the slow strategy adopted by the relatively cautious Germans might have been the right one for them, Mr. Richolt pointed out.

For investors who are eager to wait and quick to act, opportunities will slowly but steadily keep coming to the market. With hundreds of billions in euros in NPLs still on banks’ balance sheets in Italy, Spain and Germany, “there is a lot more to come,” said Deloitte’s Mr. Edmonds, who thinks this pace could last for the next few years. “We have not even started,” he said.