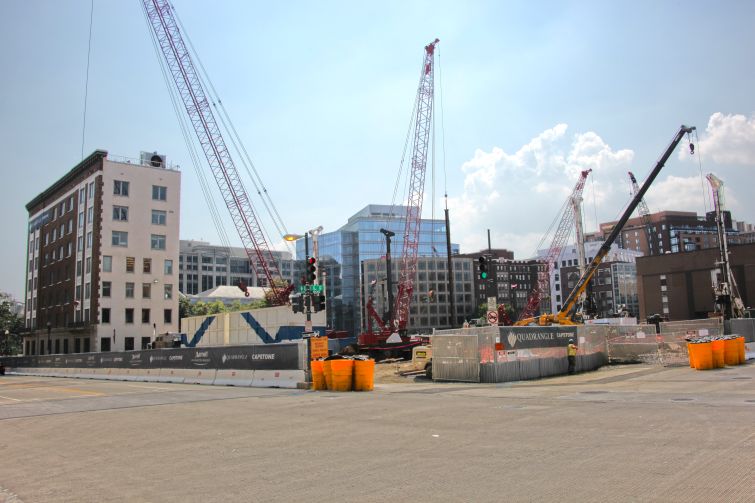 Financial institutions pride themselves on being cash-flow lenders. But in hushed tones bankers admit that the Libor plus 200-250 basis points coupon—the standard fee for a construction loan—is not enough to cover the risk. Still somehow, $1.1 trillion of commercial construction loans are currently held by banks in the U.S. as of year-end 2013, the highest level on record.  How do we wrap our minds around those two conflicting facts?

What drives lenders into the risky waters of construction lending is twofold: upfront fees and the hope that the construction lender will also have the opportunity to do the permanent loan. But those factors distract from the reality: the risk/reward metrics don’t add up. Five short years ago, there was almost zero chance of doing any construction loan, period. Just three years ago, construction lending was limited to existing customers of a given lending institution (for relationship purposes). And now? The pendulum has swung widely back in the other direction as lenders thirst for product. Across both commercial and multifamily mortgages, net construction lending had increased by over $65 billion year-over-year at the end of 2013, according to data from Chandan Economics.

For multifamily lenders, the allure is simple. Be the construction lender and once the property achieves 85 percent occupancy, Freddie Mac and/or Fannie Mae will “take you out,” so long as you meet their other prescribed hurdles. Plus many banks, such as M&T Bank and Wells Fargo, are “partners” with the agencies by doubling as DUS lenders, where they take a small first loss position and Freddie/Fannie do the permanent loan. The GSEs have a voracious appetite for product despite their, err, difficulties of 2009 and their occasional public proclamations that they want to cut back on multifamily lending. Meanwhile, the stock prices of these two entities are largely based on earnings. And those earnings are based on fees. Under such a setup it’s easy to see how underwriting standards could slip.

Dozens of banks are now touting their “bridge-to-agency” programs with attractive terms to lure potential developers. Centerline Capital Group joined these banks just last month in adding such a program, for instance. But there is no guarantee that buildings financed through these programs will achieve the necessary 85 percent occupancy to qualify for a permanent loan from the GSEs. Thus, the bank could be stuck with the loan on the books for an extended period.

Technically, commercial and multifamily banks’ delinquencies declined to 1.7 percent nationally at the end of 2013, according to Chandan. That gives lenders a convenient excuse to keep the spigot flowing. But that 1.7 percent rate is a deceiving statistic. Since construction loans always have an interest reserve component built into every loan, a lot of things would have to go wrong for the loan to be classified as “delinquent.” The percentage doesn’t include loans that are in special servicing, are underwater or are simply extended or worked out between the lender and borrower.

Developers looking for construction loans can still run into barriers, despite the relatively friendly climate. Tertiary locations and poorly capitalized developers are still shunned by many lenders. Recently higher yield lenders and hard-money types have stepped in to fill the void—to the extent that these projects still work—albeit with a coupon that approaches double digits. In New York City, almost any site will be considered satisfactory for traditional lenders. Developers here can easily find a bank that will lend, provided that a completion guaranty can be secured by a borrower whose net worth exceeds the total capitalization of the project.

Five years ago, repayment guaranties were required to insulate the bank from risk since if the project went bust, the bank could always collect the balance from the borrower. Those repayment guaranties eroded and became partial guaranties a couple of years later. Now, they’ve been eliminated entirely due to the competitive landscape of the industry. Exacerbating this was the fact that it was revealed to be very difficult to collect on these repayment guaranties, because the borrower would sue to delay any collection and the property would deteriorate while the parties were tied up in litigation. In effect, recourse loans become non-recourse loans, as the lender will simply accept the keys to the property in lieu of going after the guaranty.

At some point, the CMBS market may even be receptive to securitized construction loan obligations, if it is only a small portion of the overall pool. The CMBS market had matured to that point back in the heady days of 2006, and shows signs of regaining strength. Barring a “black swan” event, by 2016, the market should be back to its pre-Lehman froth.

Still, banks should remember that even the mightiest among them fell during the last cycle.  Deutsche Bank was a conservative lender even before the last downturn, but even they got caught with their pants down. The infamous example was their $760 million construction loan to Ian Bruce Eichner on the Cosmopolitan Hotel and Casino in Las Vegas. There, Deutsche’s loss totaled nearly $2 billion.

The risk of lenders continuing to accelerate their construction lending activities is obvious.  When the market has the inevitable downturn, those construction lenders with projects where leasing activity grinds to a halt will be left with huge exposure. But as long as lenders’ bonuses are paid on production and not on loan performance, expect these errors in judgment to continue. There will usually be one lender willing to “stretch” to win a deal.