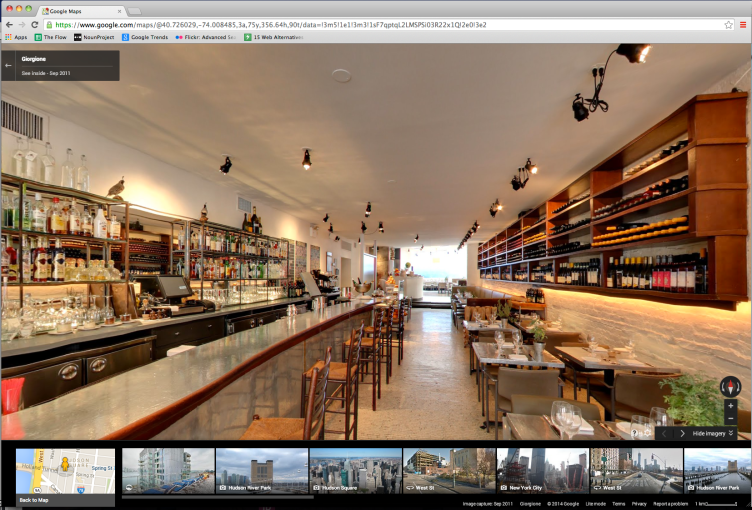 Retail pros are aflutter as they schedule their appointments for the International Council of Shopping Centers’ RECon Las Vegas. Two companies in particular are preparing for a big debut on the first day of the three-day May trade show: Related Companies and Floored.

Floored, a company providing software for the 3-D visualization of real estate, is planning to showcase the 3-D modeling of Related’s 26-acre Hudson Yards at its booth at the convention, David Eisenberg, the chief executive of Floored, told Commercial Observer. The technology will give potential tenants a sense of what it will look and feel like to be at the Far West Side commercial and residential development upon its completion in 2018. (Representatives from Related were not available for comment at press time.)

With the advent of this type of technology and Floored’s raising $5.3 million in Series A funding for it, commercial real estate landlords, developers and brokers can use Floored’s app to dynamically market properties. The videogame-like models use virtual furniture and people to provide a way for potential tenants to envision what a blank space—or even just an ugly space—could look like when it’s dressed up the right way. Building materials, lighting, walls, doors and windows can be adjusted by the user.

The cost of the models varies by project, Mr. Eisenberg said, “with services and software ranging from $.25 to $2.50 per square foot.”

Floored’s technology is not the only one of its kind in the marketplace, though it certainly isn’t ubiquitous—yet.

Google Business View (formerly known as Google Maps Business Photos), allows for a 360-degree interactive virtual tour of a business or other institution to appear in Google Search results, Google Maps and Google+ whether a user is on computer, smartphone or tablet. The tool is powered by Street View, the technology featured in Google Maps and Google Earth that provides panoramic views on individual streets worldwide.

Google Business View is limited to businesses that have a Google+ page and requires the use of a “Google-trusted photographer.”

The feature allows businesses to show off their spaces, increase their visibility on Google search displays and maintain the footage for marketing purposes, including embedding the tour on the businesses’ websites. A business just has to pay for the photographer’s time to shoot and publish the tour.

New York City-based Anthony Caccamo of Black Paw Photo, a Google-trusted photographer, said that at a minimum he charges $350 per shoot, and that would likely cover the modest tour of a pizza shop.

A mall management company hired Black Paw Photo to do a Google Business View tour of a set of Northeast strip malls so that prospective lessees could see the lay of the outdoor shopping center. Generally unless individual store proprietors agree for their shops to be captured, interiors are off limits.

Black Paw Photo has created a Google Business View tour for places like Webster Hall (to draw artists to perform in the venue) and Guastavino’s (to appeal to people in need of an event space).

Google Business View could be useful to a landlord wanting to show off a space to a prospective tenant or to eliminate the need to traipse through a space.

“I think [Google Business View] benefits buildings when prospective tenants know what others are doing within the building,” said Ryan Masiello, the chief revenue officer for View the Space, a leasing platform for commercial real estate brokers, which aims to help landlords bring visibility to their vacancies. “If [a firm] builds out a great space and a potential tenant can see what they did, it will attract other companies to create engaging environments.”

Since VTS’ inception in January 2012 it has offered a virtual space tour creation platform. At this point, VTS has the largest library of commercial real estate videos in the world with 5,000 videos in more than 30 markets, Mr. Masiello said.

“It’s helping support the whole transaction process,” he said. “People will take space without even seeing it.”

For example, he said, when the leading media and Internet company IAC was looking for office space for its division Felix/CityGrid Media, which powers local commerce, it had a specific geographic radius in mind. But when executives saw a building that was totally outside of their parameters, at 229 West 43rd Street, via a VTS video, “they said, ‘Wow, this really is an option,’” Mr. Masiello said.

VTS is a subscription model with a per-building rate starting at $200 per month and going up to a few hundred, depending on levels of information access.

Explaining the difference between VTS’ platform and Google Business View, Mr. Masiello said: “We use video to do the same, but it’s technically for a different purpose. Google is helping businesses bring visibility to a company or space. We are helping landlords attract companies to their vacant space.”

In assessing the three platforms, James Famularo, a senior director at Eastern Consolidated, said videos like VTS’ wouldn’t be ideal for marketing a retail space, which averages 1,500 to 2,000 square feet in New York City, because stores are often just simple rectangles. And he would opt for Google Business View over Floored because it is more germane to see the actual conditions of the space.

As Mr. Eisenberg explained it: “They are doing 360-degree photography. You can turn around, but you can’t move into the photograph.”

But with Floored, which employs 3-D scanning (a camera plus a laser), you can.

“I think all of these technologies impact how commercial real estate brokers are doing business because you’re less reliant on an in-person space tour,” Mr. Eisenberg said.

In most cases, potential tenants want to view a space before signing on the dotted line, but Google Business View can be helpful in weeding out the rejects.

“A virtual tour would be another useful tool to help tenants, many of whom are not local and cannot envision specifics relative to individual spaces, in order to best make decisions,” said Robin Abrams, an executive vice president at Lansco.

The owner of an Italian fashion brand was in the city recently and once he saw the space Lansco was negotiating on, he determined that he wanted a larger one in the same building. Had he seen the space via video prior, Ms. Abrams believes Lansco could have honed in on the larger space from the outset.

A number of people Commercial Observer contacted weren’t familiar with this technology, but in time, they could be.

Can this type of technology alone seal a deal?

Mr. Famularo said that he was marketing 307 Spring Street, home to Giorgione restaurant, when he Googled the address. He came across the Google Business View and is now closing a deal after sending the link to a restaurateur who wanted the space after viewing the online tour. Mr. Famularo said he is negotiating terms with the new tenant, which would keep the place as Giorgione.

But technology is only as good as the folks that use it.

“This [type of technology] would be helpful for sure,” Ms. Abrams said, “but still not take the place of a tenant touring the market area and the actual site.”