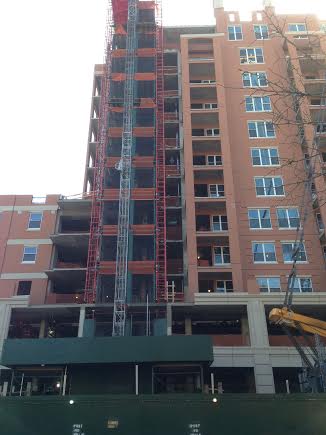 Now that 50 Oceana Drive East has topped off, Muss Development is looking to fill about 24,000 square feet in the Brighton Beach building with commercial tenants.

The 62-unit condominium at the corner of Brighton Beach and Coney Island Avenues has 8,420 square feet of retail space for one to three tenants available on the ground floor, where asking rent is $85 per square foot, and 15,490 square feet of medical or community office space available on the second floor with an asking rent of $45 per foot, Jason Muss, a principal at Muss., told Commercial Observer at ICSC‘s RECon in Las Vegas.

SEE ALSO: The Future of Physical Retail: 5 Trends to Watch

“Medical space is at a premium,” Mr. Muss said.

The commercial space is unique for South Brooklyn, Mr. Muss said, because it is new with 16-foot ceilings, comes with all of the modern bells and whistles and was LEED-designed by SLCE Architects. The entire building was built to post-Superstorm Sandy standards. That means the electrical switch gear was moved from the basement to an elevated platform well above the flood plane level and the elevator controls were moved from the basement to the roof.

The building at 50 Oceana Drive East, slated for delivery in late summer, is part of a 16-building, 927-unit luxury condo development called Oceana Condominium and Club by the developer.

Muss’ Bill Bergman and Ross Spitalnick are handling leasing of the commercial space.