How Far Will They Go? 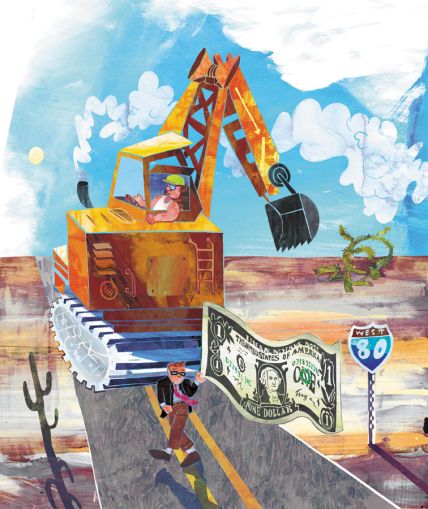 When the heads of the Manhasset, Long Island-based real estate firm Milbrook Properties began seeking acquisition financing for a retail strip in Marietta, Ga., they called on People’s United Bank, a relationship lender they had worked with on nearly 10 deals in the last 18 months.

The borrowers, who are seeking about $5.5 million to purchase the property, felt People’s United would offer the most favorable and flexible terms, said Charles Hirsch, president of the more than 80-year-old real estate management, acquisition and development firm, given their rapport.

“People’s has been very committed to working with us and they have not balked at anything,” said Mr. Hirsch, who has relied on the bank to finance several of Milbrook’s deals in New York and Florida. “We’re an established real estate company and they felt comfortable working with us on transactions in Long Island as well as transactions outside of New York.”

People’s United, based in Bridgeport, Conn., with more than 400 branches in the New England and Mid-Atlantic areas, oversees a commercial real estate portfolio of $9 billion. The bank lent about $2 billion for commercial and multifamily transactions, inside and outside of its respective markets, in 2013. “Lending out of market is something we do on a regular basis for people we know,” said John Costa, executive vice president and head of the bank’s New York commercial real estate business. “A lot of lenders say that they’ll do that and then the client has a deal somewhere else and they’ll find all of these reasons to say ‘no.’”

The bank recently agreed to provide construction financing for additions to Flamingo Market Place, a retail property Milbrook owns in Pembroke Pines, Fla. That deal will go through as long as the borrowers are able to sign a lease with a prospective government tenant looking to occupy the added space, both parties confirmed.

Regional relationship lenders, People’s United among them, pride themselves on taking a step further for established and longtime borrowers. Yet they all have their own thresholds when it comes to trekking outside of their footprints to finance new developments and acquisitions and refinance existing debt. For some lenders, such as Westbury, N.Y.-based New York Community Bank, the buck stops at construction deals, which carry especially high risk in unfamiliar territories. For other lenders, including Cleveland-based KeyBank and Providence, R.I.-based RBS Citizens, the boundaries are less predetermined.

“There’s not really a limit for us in terms of geography, but we do have risk-management limits based on a variety of factors,” Gary Magnuson, RBS Citizens’ head of commercial real estate, told Mortgage Observer. The British-owned regional bank, which has a commercial real estate portfolio of $6.9 billion, typically lends in New England and the Mid-Atlantic as well as Minnesota, Wisconsin, Indiana and Missouri though the bank’s Chicago office. However, RBS Citizens has gone as far as Arizona and California for longtime borrowers, Mr. Magnuson said.

RBS Citizens, which began expanding outside of the New England area in 2001, is getting ready to open a general banking office in Charlotte, N.C., to further extend its reach into the south. “If we have a relationship with a sponsor in our footprint who is doing a deal outside of our footprint, we would follow them outside of market to do that deal as long as we thought it made sense from an economic and credit standpoint,” Mr. Magnuson said.

For construction deals in particular, those criteria include established sponsorship and preleasing—or at least sufficient demand—as well as the right amount of equity, he explained. “But whether its construction, acquisition or refinance, we want our borrowers to have an experienced record for deals done outside of our footprint,” he said. “They need to demonstrate their abilities to us before we would follow them far afield.”

Among the more flexible regional lenders is KeyBank. The bank’s real estate finance arm, KeyBank Real Estate Capital, provides loans for all purposes across all 50 states, said Daniel Baker, a senior vice president at the bank in charge of CMBS originations. In 2013, KBREC originated $29.3 billion in commercial real estate transactions, making it the country’s fifth largest commercial real estate lender, according to a recent report from the Mortgage Bankers Association. “We will do construction, we will do bridge, we will do perm,” Mr. Baker said. “We will do the servicing of the loans in the CMBS and life company business as well.”

KeyBank, which operates 27 regional commercial real estate lending offices, recently provided a $26 million construction loan to a Chicago-based sponsor for the development of an apartment complex in Raleigh, N.C., and a $40 million construction loan to another Chicago-based developer for an industrial building in Southern California, Mr. Baker said. The bank in early April closed a $32 million CMBS loan on an industrial logistics building in the suburbs of Boston developed by an Indianapolis-based sponsor. KeyBank also provided the original construction loan on that project.

“If Elliott Quigley, our balance sheet lender in Chicago, meets a potential borrower that is based in New York, he will refer that client to John Manginelli in our New York office,” Mr. Baker said, emphasizing the bank’s protocol of matching its regional executives with its borrowers by home turf. “Assuming the borrower is someone who fits our client profile, John Manginelli will then follow that client, wherever his projects are, all over the country.”

When negotiating deals outside of the bank’s footprint, KeyBank’s senior managers often have to compete with other lenders more proximate to those projects in order to win those chunks of business. For that reason, “our loan terms need to be competitive with not only other national lenders but also the smaller regional banks,” Mr. Baker explained. The regional lender draws the line at the U.S. border, due to regulatory issues and a lack of a banking presence outside of the country, he said.

Leading multifamily lender and local savings bank NYCB has stricter boundaries by comparison. The bank, which was founded as Queens County Savings Bank in 1859, now provides financing for established borrowers on commercial real estate assets in New York, New Jersey and Pennsylvania—the three states within the bank’s primary footprint—as well as properties in Ohio, Arizona and Florida. The willingness to extend its lending operations to two of those states came with NYCB’s 2009 acquisition of AmTrust, a regional bank based in Cleveland.

“We’ve always had a presence in Florida, even prior to the AmTrust acquisition,” the bank’s senior executive vice president and chief lending officer, James Carpenter, told Mortgage Observer. Many of those deals were with “New York owners that acquired in Florida, who we then followed there,” he said.

NYCB, which manages a commercial real estate portfolio of $28.4 billion between three offices in New York, Arizona and Ohio, originated $9.6 billion for commercial properties in 2013. A sizeable $7.4 billion of that was for multifamily properties, Mr. Carpenter noted. The bank selectively originates construction deals in the New York area, about $500 million in total, but does no such deals in Ohio, Arizona and Florida, even for its longest standing customers.

Our construction finance is for the most part limited to the boroughs of New York City and Long Island,” Mr. Carpenter said. “Construction finance is the riskiest form of commercial real estate finance, in my view, and we look to lend close to home so we can monitor the progress of the project.”

Wayne, N.J.-based Valley National Bank, which lends in its home state as well as parts of New York and Eastern Pennsylvania, also takes a conservative stance when it comes to financing construction projects out of market. “If you are lending on a construction project, there are times that you should be inspecting it without having to waste your whole day getting there and back,” said Russell Murawski, first senior vice president and head of the bank’s commercial real estate department. “We take the approach that if the site is within driving distance of one of our branches, we’ll do it.”

Valley National will consider lending in other markets where its senior executives know the landscape—literally. The bank, which has a commercial real estate portfolio of $3.8 billion, lent $1.5 billion on commercial and multifamily transactions, some of them in southern states, last year. For longtime borrowers, the bank has gone the extra mile to provide construction financing for developments in the Carolinas and Florida, according to Mr. Murawski. Among those deals is a recent ground-up luxury residential project on the water in Hollywood, Fla., he said.

“Several of our senior and executive managers happen to have secondary residences in Florida, so it’s pretty easy for them to look at a piece of property if they’re going down there for a long weekend,” he said. In the past few years the bank has also provided acquisition loans for customers buying retail centers in Ohio, Texas and Arizona, Mr. Murawski said, noting that deals in those states are often recourse.

For other Northeast regional lenders, requests for loans outside of their respective footprints have become less frequent, due to rising demand in the top markets within. Among such lenders is Buffalo, N.Y.-based M&T Bank, which counts New York City as one of its sweet spots. “In discussions with our customers, we’re hearing them say, ‘We’re focused on New York City more than ever,’” Matt Petrula, ‎senior group manager of commercial real estate in M&T’s Manhattan office, explained.

He outlined the Mid-Atlantic, Virginia and the southern part of New England as the commercial bank’s primary lending area, though it operates offices in Portland, Ore., and Toronto as well. The Portland office, which M&T opened nearly 20 years ago, allows the bank to help its relationship customers looking at projects on the Northwest Coast, while the Toronto office, which the bank opened in 2010, “has given us the ability to lend on a number of Canadian projects for our U.S. clients,” he said. The bank as a whole oversees a commercial real estate portfolio of $26.1 billion.

Mr. Petrula was unable to recall the last time the bank financed a deal for one of its New York customers outside of the bank’s footprint, but said he believed it was in 2011 or early 2012, before New York’s real estate market fully regained its footing. He cited “a few recent hotel deals” for existing New York borrowers with projects in other markets without getting into specifics.

In April 2013, luxury condominium and hotel developer Steve Witkoff told Mortgage Observer that he had been in talks with “the M&T guys”—who he referred to as longtime friends—about financing potential transactions in Miami. “We would be happy to support Steve on something like that,” Mr. Petrula said of following Mr. Witkoff down south for the right transaction. But for now, no such deal is in the works, he noted.

“Every lender is different,” said Mr. Hirsch of Milbrook Properties. “Many are set in their ways and will not deviate from their normal path. If they do, they certainly require a lot more fees and terms.”

Mr. Baker of KeyBank noted that other lenders pinned to more specific territories are often bound by a deeper sense of familiarity with those areas. “A lot of your smaller regional banks are just more comfortable in the markets where they have a presence because they know those markets the best,” he said.