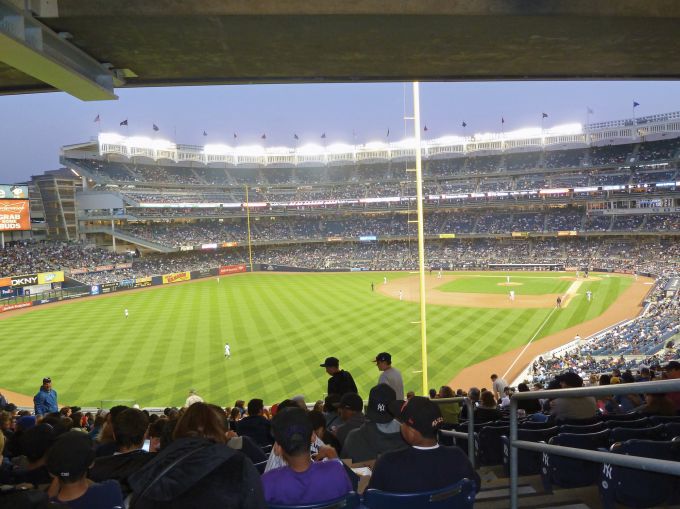 Baseball has long been considered a rite of spring. The sound of bat on ball has for decades been associated with those fledgling days of warm weather when New Yorkers in the Bronx and Queens embrace the early games of baseball season with a sense of renewed hope that this may just be the year.

It may also be a time of renewed hope for the neighborhoods the Yankees and Mets call home. Five years removed from the openings of the new Yankee Stadium and Citi Field, the areas around both young stadiums are set for rebirths.

Change is already afoot in the South Bronx, where the building of the new Yankee Stadium increased the desirability of the area surrounding the ballpark; real estate values are increasing there and market-rate apartment buildings are beginning to pop up.

“The stadium has a positive impact on the neighborhood,” said David Simone, a first vice president of sales at Massey Knakal who specializes in the Bronx. “It brings stability to the area and people generally want to live around it.”

In a rare occurrence for a neighborhood where housing is generally subsidized, Massey Knakal last year brokered the sale of a lot on Summit Avenue near Yankee Stadium where the buyer has plans for a market-rate multifamily development.

Another transaction, a $500,000 sale of a vacant lot at 920 University Avenue, is expected to yield the closest hotel to Yankee Stadium.

“There is demand for hotel rooms, not only from people going to Yankee Stadium but also those going into Manhattan,” Mr. Simone noted. “The South Bronx is becoming a place people are willing to stay.”

The state of the South Bronx today is a far cry from its reputation as recently as a decade ago, according to some brokers who remember a deflated market.

“The nearby real estate benefits from [upgraded stadiums],” said Adelaide Polsinelli, a senior director at Eastern Consolidated. “I can remember marketing space in the Bronx 10 years ago and not many buyers were interested and if they were they were getting a big discount, but today the values are holding their own.”

Another neighborhood benefit is the excellent access to mass transit. The area surrounding Yankee Stadium can be accessed by subway on the No. 4, B and D trains, by Metro-North Railroad on the Hudson Line and by numerous bus lines.

And despite the positivity expressed by brokers in the South Bronx, the best may still be to come. Among the future Bronx developments could be a professional soccer stadium and a waterfront park.

The Major League Soccer expansion franchise New York City Football Club in 2015 will play its first season at Yankee Stadium and could build its own 28,000-seat, soccer-specific stadium in the neighborhood. Though a development deal for the venue seemed closed late last year, Mayor Bill de Blasio has questioned the amount of tax breaks and public financing associated with the project. Still, neighborhood brokers are optimistic that a Bronx soccer stadium would benefit the area.

“I can’t see the soccer stadium being a negative for the immediate neighborhood; it would increase values for existing properties and draw more people to the area that otherwise wouldn’t be there,” Mr. Simone said.

There are also plans for a waterfront park just south of Yankee Stadium, which Mr. Simone likens to Brooklyn Bridge Park. He expects the amenity to further augment the desirability of the neighborhood.

Promise of neighborhood improvement in the shadow of Yankee Stadium may be trumped by the plans near the Mets’ Citi Field. Long known for little more than ball games, auto repair shops and the annual U.S. Open tennis slam, Willets Point in Queens is now the target of a $3 billion redevelopment plan by Queens Development LLC, a joint venture between the Related Companies and Sterling Equities, the real estate development company co-founded by Mets majority owner Fred Wilpon. Said to have been the inspiration for what F. Scott Fitzgerald called the “valley of ashes” in “The Great Gatsby,” many argue that the redevelopment came not a moment too soon.

Originally approved in April 2008, a year before the opening of Citi Field, the New York City Economic

Development Corporation’s Willets Point plan aims to turn the much maligned area into “New York’s next great neighborhood,” one replete with mixed-income housing, retail and entertainment amenities. The NYCEDC, which did not immediately return requests seeking comment, estimates the project will yield a 30-year total economic impact of $25 billion.

The 62-acre development site features Citi Field at its heart. And given what was the garish, dilapidated state of Shea Stadium—the Mets’ prior home—it’s no stretch to recognize the new ballpark as the catalyst of the push to transform Willets Point.

“The redevelopment of Willets Points probably wouldn’t have happened without the stadium,” Stephen Preuss, a vice president of sales for Massey Knakal who operates in Queens, told Commercial Observer. “Those go hand in hand and that was probably the greatest aftereffect of Citi Field.”

While area brokers are optimistic about the future of the area immediately next to Citi Field, they concede it could be some time before results are realized.

“It’s going to be a protracted process and don’t think you’ll see a lot there in the foreseeable future,” Mr. Preuss said.

Mr. Preuss is quick to note that the surging land prices—up between 10 and 20 percent since before the downturn—and ambitious development projects being witnessed in nearby Flushing proper has little to do with Citi Field. Other factors, namely the improving economy and increased presence of international investors are driving the market.

“It’s nice to have the new stadium, but a lot of other factors have affected the area more so than the stadium,” he said. “It has spurred more interest, but it hasn’t been a dramatic shift.”

The economic benefits of state-of-the-art stadiums cannot be ignored, brokers agree. Ancillary businesses including nearby retailers and vendors all gain from increased traffic around sports venues.

“If you get there early for a game, you will walk around, you will venture out, and you will buy something, eat something and come back tell your friends,” said Ms. Polsinelli. “It gets exponentially more broadcast.”

“You need that focal point, that one draw that says there’s a commitment to keeping this area safe and viable,” she said. “We all hate the crowds, but the crowds come with money.”