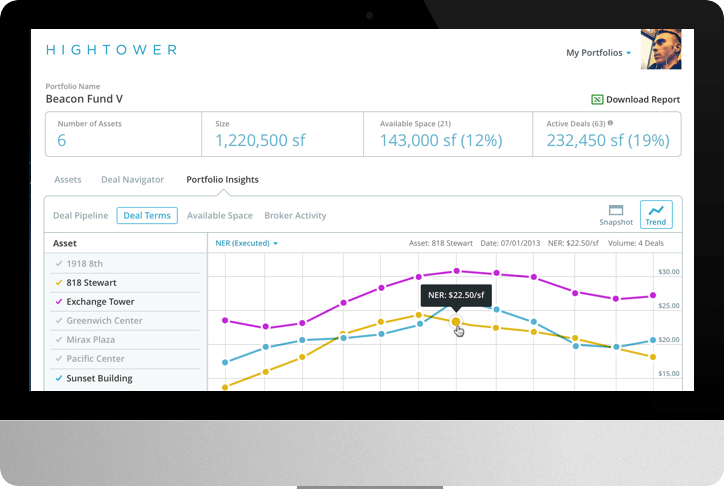 Commercial real estate analytics platform Hightower continues to gain traction in the market, attracting both brokers and owners as users. The company, which closed its $2.1 million seed round last year, has already signed large enterprise agreements with several institutional investors, including Beacon Capital, as well as a pilot agreements with CBRE and JLL.

Beacon Capital will use Hightower to support its entire national portfolio, while JLL and CBRE have signed multimarket agreements for use by the firms’ brokers, according to Brandon Weber, the platform’s chief executive and founder.

“We fundamentally believe we have the ability to reimage the commercial real estate industry,” Mr. Weber told Commercial Observer.

In practice, Hightower pulls all of a broker’s or investor’s information and data and compiles it under one roof in to what Mr. Weber calls a “command center.”

“Brokers are asking for Hightower now and all of their data, files and availabilities are available on a mobile app,” Mr. Weber said. “We bet big on mobile, we’ve been mobile-first since the beginning.”

Today, Hightower boasts over 75 million square feet of space in its system and a presence in 34 national markets, with international use set to launch soon. The company, which recently traded Seattle for Manhattan, has 18 employees with three additional positions open for hiring.

With the seed round in the rear view mirror, Mr. Weber admits Hightower plans to pursue Series A funding sooner rather than later, though there is no set timeline.

“The Series A round is in the pipeline and given the growth curve we’re seeing on the customer side, it’s exciting,” he said.

Hightower’s current backers include a number of individual investors and venture capital firms, including Bessemer Venture Partners and Thrive Capital (Josh Kushner, the founder of Thrive Capital, is the brother of Jared Kushner, who owns Observer Media Group and publishes Commercial Observer.)

Mr. Weber is scheduled to speak this afternoon at the Honest Buildings Real Estate Innovations Summit.

Update: This story has been updated to reflect that CBRE and JLL have signed pilot agreements with Hightower.