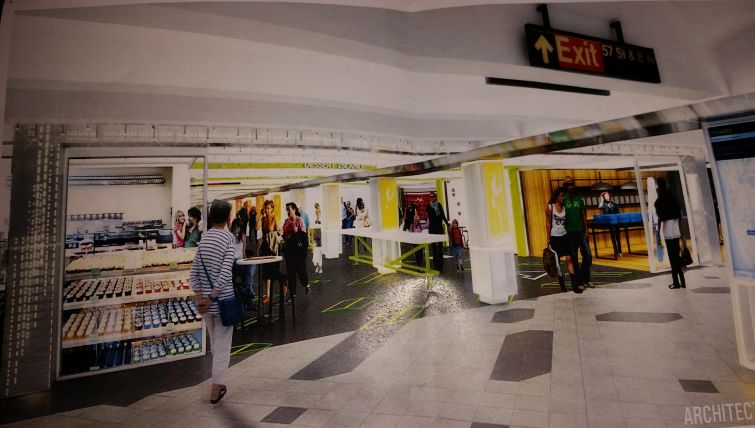 Picture of the rendering in the marketing materials for Turnstyle. Lauren Elkies Schram

Letters of intent have been signed and leases issued to both treat shops, sources told CO. The candy shop is expected to take 635 square feet and Magnolia is supposed to take more than 450 square feet, both on the north end of Turnstyle, according to sources and the Turnstyle marketing materials.

The retail development’s roster of roughly 30 tenants includes sellers of coffee, soap, craft beer, and high-end eyewear in addition to an ATM, a Dumbo-based pizzeria, a fast-casual restaurant and an international sushi place with sushi delivered to diners via a conveyor belt. Eighteen tenants have signed letters of intent with leases issued, six are in negotiation and six are available, according to Lansco’s Robin Abrams, who is leasing the marketplace with colleagues Lisa Rosenthal and Ryan Bergman. Many of the tenants have outposts in Grand Central Terminal or Chelsea Market. Ms. Abrams said she is hoping the leasing team can land juice and salad bar tenants.

“We have all of the natural drugs—caffeine and sugar—and we want some more healthy fast-serve food options,” she said. “We could’ve done all sugar and coffee we had so much interest.”

Ms. Abrams declined to specify tenants but said there is a “synergistic co-tenancy.”

The tenant mix represents “the best of the best in every category,” she said. Mses. Abrams and Rosenthal were at the International Council of Shopping Centers‘ RECon conference in Las Vegas passing out the merchandising plan to prospective tenants. (The new marketing materials do not include a hyphen in the Turnstyle name, as was previously the style.)

The northern end of the project is dedicated to small grab ‘n go food users. The middle is for dry retail uses and the southern end is for food establishments providing a “more relaxing experience,” she said.

Overall, the marketplace will be ideal for “a lot of impulse and gift items,” Ms. Abrams said.