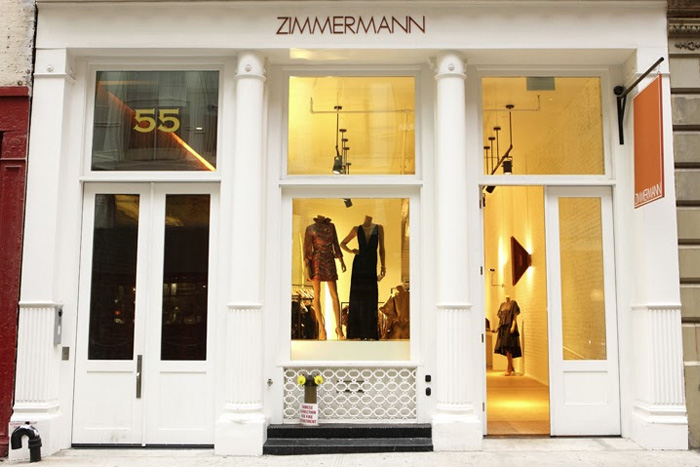 The Sydney, Australia-based swimsuit and resort-wear sellers procured a 1,250-square-foot space at 875 Washington Street in the Meatpacking District and a 1,000-square-foot storefront at 27 Newtown Lane in East Hampton.

“Zimmermann’s recent growth contributes to the continued demand for New York’s top retail markets,” said Zimmermann’s broker in the deals, John Cahill, a managing director of Colliers International, in a prepared statement. “The label’s new locations will bring more of the Australians’ styles to the U.S. fashion scene this season and will bolster its standing as one of high-fashion’s favorite, rising brands.”

Mr. Cahill previously represented Zimmermann when it moved its flagship store to a 3,800-square-foot location at 55 Mercer Street in Soho late last year. With the two new sites in New York and an existing one in Beverly Hills, the retailer will now have four U.S. stores to add to its existing 15 in Australia.

Sisters Nicky and Simone Zimmermann started the brand in 1991 with a focus on original prints and quality fabrics, and the two recently took home the 2014 Australian Fashion Laureate award during Mercedes-Benz Fashion Week. Stores like Barney’s, Saks 5th Avenue and Bloomingdale’s also stock Zimmermann, according to the company’s website.

It wasn’t immediately clear who represented Thor Equities and ASB Real Estate, who own the five-story, 60,000-square-foot Meatpacking District property, and neither immediately responded to requests for comment. L W L LLC owns the other property, a two-story cottage on a retail strip in East Hampton, according to PropertyShark.