The Tide is High: Jamaica, Queens Could Become a Destination in its Own Right 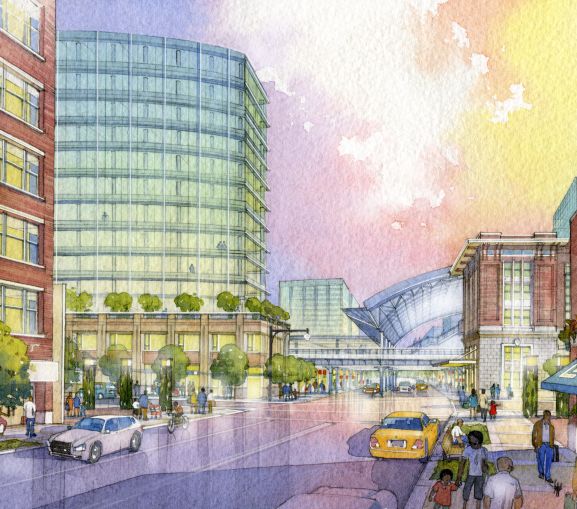 Ask the average New Yorker about Jamaica, Queens and you’ll likely hear an answer about its rail station or proximity to J.F.K. airport. Despite the development boom occurring west of the neighborhood in Astoria and Long Island City, Jamaica continues to feature more prominently in the minds of many city residents as a stopover en route to more glamorous locations.

But since the neighborhood was rezoned, local stakeholders have become increasingly optimistic that the perception of Jamaica as a gritty transit and discount shopping hub can change.

“We see the downtown [area] as a regional center of many activities that if concentrated here would have a high public purpose,” said Carlisle Towery, the president of the Greater Jamaica Development Corporation, the area’s economic development entity.

The area is at once “under-housed,” “under-hoteled” and “under-retailed,” according to local stakeholders, who are engaging developers in discussions on how to improve the neighborhood’s building stock.

Those discussions are already paying dividends. There are a number of multimillion-dollar development projects in the pipeline in the vicinity of Jamaica’s bustling Long Island Railroad and AirTrain stations.

“The opportunities here are apparent when you look at land values compared to other parts of the city,” Mr. Towery said. “There are readily available sites that are zoned for development at prices that are appealing.”

In 2007, the City Council approved the Jamaica rezoning plan to increase the development potential in the area. The plan included 368 blocks and updated zoning regulations that hadn’t been meaningfully addressed in nearly half a century.

Increased development and improvement of Jamaica’s building stock would go a long way toward changing the perception of the neighborhood in the rest of the city as simply a rough-around-the-edges transit pit stop. Mr. Towery acknowledged that Jamaica’s reputation has been a deterrent in the past but is determined to stress what he deems are the realities.

“We recognize the gritty image, but we believe that image is based on a perception that’s not a reality,” he said.

Still, Jamaica does see its share of violent crime. Just last weekend, 17-year-old Khalil Bowlin was shot and killed at 143-07 Lakewood Avenue, about 10 blocks south of the LIRR station.

Such crimes aren’t the norm, Mr. Towery argued. “I can count on one hand the incidents of crime; it’s not there,” he said. “The crime is perceived more than it is realized.” (In the 103rd precinct, which covers downtown Jamaica, the overall crime rate has dropped 78 percent since 1993 according to CompStat. That said, the precinct reported five murders in the first quarter of 2014, up from a single murder for the same period last year.)

Perception (promoted by 50 Cent, among other rappers who grew up in Jamaica) or reality, the crime rate doesn’t seem to have curbed the increased appetite for development in the area.

Among the most notable projects in the pipeline is a $225 million mixed-use building at the corner of Sutphin Boulevard and Archer Avenue that is expected to boast up to 100,000 square feet of commercial and retail space and 400 apartment units.

The site for the project was assembled over time by Greater Jamaica Development Corporation and sold to BRP Companies, a transit-oriented, mixed-income developer. With experience developing transit-related projects area-wide, the developer expects the Jamaica opportunity to be a successful venture.

“[Jamaica] has the density, it has the economic activity—particularly downtown—and it is right on a transit node,” Meredith Marshall, the managing partner and co-founder of BRP Companies, told Commercial Observer. “Based on our due diligence on commercial viability and demand, Jamaica stands up well.”

The development is expected to be divided among approximately 20 percent affordable units, 50 percent market-rate units and the remainder allocated to the New York City Housing Development Corporation’s New Housing Opportunities Program, or NewHOP. The initiative combines a first mortgage, funded through proceeds from the sale of variable or fixed-rate taxable bonds, with a second mortgage, provided through HDC corporate reserves, to finance multifamily rental housing affordable to moderate- and middle-income families.

Elsewhere, the Bluestone Organization is on schedule to complete a $32 million mixed-use project with 100 units of mixed-income housing and 12,000 square feet of commercial space by this summer. The development, called Norman Towers, is located at 90-14 161st Street, between 90th and Jamaica Avenues.

The building will offer studio, one-bedroom and two-bedroom apartments with rents ranging from $500 and $1,700 per month, according to published reports. Eric Bluestone of the Bluestone Organization did not return calls seeking comment on the project.

Jamaica is also working to help solve the area’s hotel shortage. Just south of the BRP development site, at the corner of Sutphin Boulevard and 95th Avenue, Able Management has plans to build a $35 million, 210-room hotel under the Hilton Garden Inn brand. With its proximity to transit hubs—the site is directly across the street from the LIRR and AirTrain station—the hotel development should appeal to travelers, but both the developer and the Greater Jamaica Development Corporation hope the accommodations will attract a broader demographic.

“We feel the hotel will cater to more than travelers,” said Viral Patel, the chief executive of Able Management. “People visiting within the Queens market, as well as the western Nassau [County] market, will utilize the hotel as a matter of convenience.”

The hotel, which is expected to break ground between the fall of this year and spring of 2015, will include a meeting facility, a restaurant and a bar. There had been plans for a retail component, but the overall square footage limited the developer’s options.

Despite that minor setback, stakeholders are optimistic that a department store will soon return to Jamaica. Once home to three such stores, the neighborhood waved goodbye to its last in 1981and has since become a hub of discount retailers.

“Generally, Jamaica is under-retailed,” Mr. Towery said. “There is a huge improvable market for retail development here and huge interest.”

According to the Greater Jamaica Development Corporation, there is $3.7 billion worth of unmet consumer demand within a 3-mile radius of Downtown Jamaica. In an effort to satiate that market, the economic development group last year contracted Blumenfeld Development Group to transform two ground-level parking lots at 168th Street, between 90th and Jamaica Avenues. The estimated $50 million project would see Blumenfeld increase parking capacity of one lot to a full garage while converting the other into a department store.

The importance of Jamaica’s proximity to J.F.K. cannot be overstated and is highlighted by numerous stakeholders as the neighborhood’s most appealing attribute. Since late 2003, Jamaica has been a hub for the Port Authority’s AirTrain, an 8-mile rail shuttle with service to J.F.K.

Jamaica has become so integrated with the airport that Mr. Towery links the neighborhood directly to New York’s busiest airport. “In effect, we are a piece of the airport, and we see potential for aviation-related development of all sorts,” he said.

Bolstered by both Jamaica’s transit assets and the spate of new development in the area, hope abounds for investors, who are confident the tide is changing.

“We certainly feel there is growth potential in Jamaica and feel the developments in Jamaica are gaining traction,” Mr. Patel said. “There are other projects around Jamaica Square, which once realized will spur more growth in the area.”

The demographics would seem to back up the enthusiasm. The average household income of the 670,000 people living within a 3-mile radius of Downtown Jamaica is $75,000, placing the area firmly in New York City’s middle class. That population spends more than $6.5 billion per year on retail goods and services, according to the Greater Jamaica Development Corporation.

Despite the signs of positive growth, stakeholders have cautioned against making comparisons to the recent drastic transformations of other outer borough comeback kids.

“I don’t see potential growth like the Long Island City waterfront, but that’s really not Queens; it’s not the heart of Queens,” Mr. Towery said. “We see potential but not like Downtown Brooklyn, with the towers there.”