Start Me Up: Young Tech Companies on Real Estate 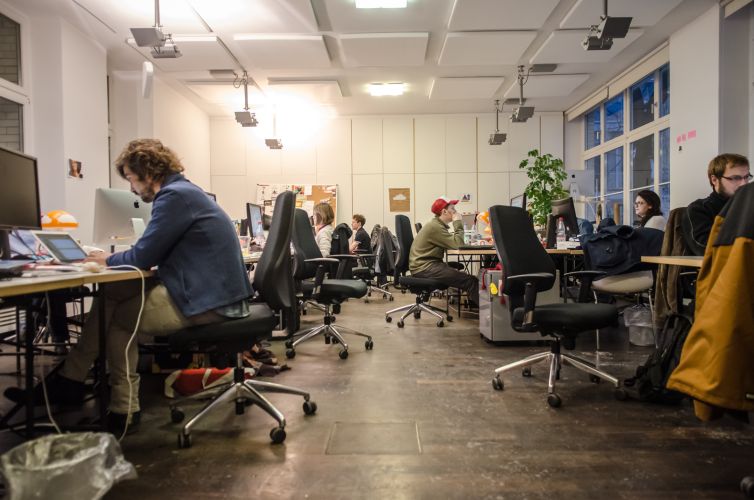 The vast majority—36 respondents—considered it “not important” and eight admitted to never having thought about real estate at all. Yet every single respondent indicated that proximity to other start-ups and tech companies was important. When asked which areas of the city they liked, the fledgling companies answered with neighborhoods like Soho, Flatiron and Chelsea—all in Silicon Alley.

It’s clear that start-ups think about space differently. It’s not simply about bricks and mortar.

Despite the survey results, real estate is seen by many start-ups and entrepreneurs as a central component to recruiting talent and cultivating business. Whether in a co-working environment or a dedicated office, space is viewed as part of the company’s brand and identity.

“I’ve always said that location matters; it’s about culture,” said ABS Partners’ Ashkán Zandieh, who conducted the anonymous survey. “Start-ups have to subsidize the lack of money they can offer with culture.”

SeedInvest, an equity-based crowdfunding platform that closed its $2 million Series A round on last Monday, is set to outgrown its current home and is in the process of evaluating its next move. Currently based out of 500 Startups, an accelerator, the start-up is considering a move to either its own dedicated office space or WeWork.

“We are about to outgrow the space,” said SeedInvest Chief Executive Ryan Feit, who did not participate in the survey. “We’re considering our own space but I think it’s more likely we’d move into WeWork.”

Co-working spaces like WeWork have their advantages due to both flexibility (contracts are month-to-month) and proximity to other early-stage businesses. As a company that works directly with start-ups, that proximity is of paramount importance to SeedInvest.

“Being near that whole ecosystem is really valuable,” Mr. Feit said.

While co-working is ideal for some, there is a tipping point to its value. As start-ups grow, so too do the costs of remaining within the co-working environment.

“Once you reach the threshold of 10 to 15 people, you should consider moving out,” Mr. Zandieh noted. “You’ll pay more in that range at a co-working space than in your own dedicated office.”

Mr. Feit, who is part of an eight-person team at SeedInvest, concedes that there exists a breakeven point between 10 and 20 employees at which it makes more sense to lease dedicated space, but notes that that doesn’t take into account the new business generated by working within the collaborative environment.

Other start-ups are just looking for a space to call their own and in rare instances eschew the co-working model all together. The management of Reonomy, a real estate tech platform, decided to sublease a small space within another, unrelated business’s office, rather than co-work.

Which isn’t to say they didn’t consider the option—Rich Sarkis, the chief executive and co-founder of Reonomy, toured both WeWork and Grind and described space there as “glorious” and “tempting.”

Reonomy resisted the temptation, however, and instead opted to sublease on 30th Street between Seventh and Eighth Avenues, which by Mr. Sarkis’ admission was further outside the traditional Flatiron District neighborhood than he and many of his employees would have preferred.

The company wouldn’t be there very long. “We quickly started to outgrow that space so we started looking again,” Mr. Sarkis said.

In November, Reonomy signed a two-year lease for a 1,000-square-foot office at 37 West 26th Street, closer to the tech-heavy Silicon Alley corridor. The lease included a 60-day rider that allowed the company to move out with two months notice. That wound up coming in handy.

Reonomy closed its $3.7 million Series A round last month—faster than expected—and is on the move again, for the third time in 18 months.

With an MBA from the University of Pennsylvania’s Wharton School and a professional background that includes a stint at the prominent consulting firm McKinsey, Mr. Sarkis attacks most business decisions on a quantitative basis and real estate was no different. Of the company’s Series A funding, a specific amount was budgeted for real estate.

Mr. Sarkis admits the Reonomy’s current space has done little to help the company’s recruitment and branding, largely because of the perception of what a start-up’s office should look like. Even visiting investors told him Reonomy should move, he said.

Brokers were given a firm search grid of the Flatiron District below 26th Street, where the company is based now.

“I love the neighborhood, but I’d be happy anywhere. It was important for the engineers to be in Flatiron,” Mr. Sarkis said, admitting that start-ups want the elusive “cool factor” when it comes to the office hunt.

Reonomy will move to a new 3,000-square-foot office south of its current location in the next few months. The location, Mr. Sarkis said, is bigger than the company needs but will provide the flexibility to grow. In the meantime, the company will likely sublease a portion of the space.

Finding space for the immediate future that also provides room to grow is not a situation unique to Reonomy. SeedInvest faces a similar conundrum.

“We’re about to grow out of it and we’re thinking about where we are,” Mr. Feit said. “It’s a balancing act between getting our own place and getting space that we can grow into.”

Mr. Sarkis described the process of looking for offices as “a pain in the butt,” and though he didn’t participate in Mr. Zandieh’s survey, he suspects the reason so many start-ups labeled real estate as unimportant is because there are more core business issues to consider. For an early-stage business with so many development- and revenue-driven decisions to make, the thought of allocating considerable time to a real estate search is a headache.

But whether start-ups like it or not, real estate comes at a significant cost and represents signs of growth.

“Growth means hiring more people. And if you need to hire more people that will translate to office growth,” Mr. Zandieh explained. “Your employees are the biggest cost you’re going to incur and the second biggest is real estate.”