Miki Naftali of Naftali Group is the Million-Square-Foot Man 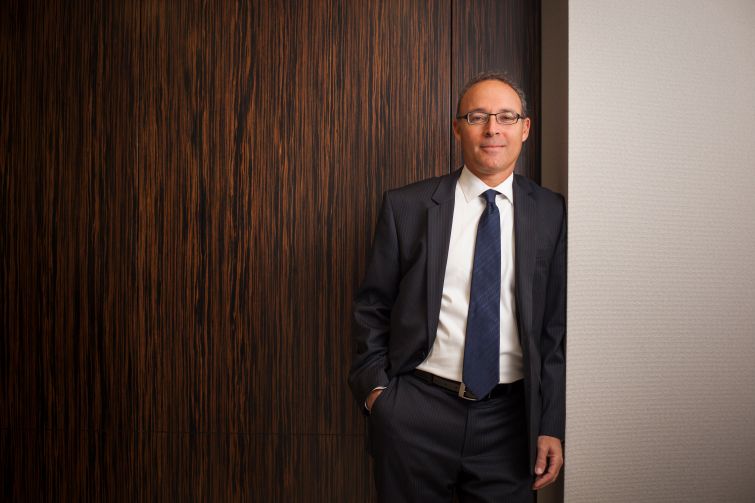 Since its inception nearly three years ago, Naftali Group has completed or is constructing 1.05 million square feet of residential condominium, rental and multifamily development, including a Pace University dormitory at 33 Beekman Street. This year, Naftali Group will be launching three condos—234 East 23rd Street, 261 West 25th Street and 206 West 77th Street—and a rental building, the Bergen, at 316 Bergen Street in Boerum Hill. In addition to his offices at 1700 Broadway, which houses 22 employees, Naftali recently opened an office in Delray Beach, Fla. Miki Naftali, the company’s chairman and chief executive officer, received a lot of attention when he led the $450 million restoration and reconfiguration of the Plaza Hotel as the president and CEO of Elad Properties. Flanked by his marketing pro and an outside P.R. person, Mr. Naftali, 51, talked to Commercial Observer last week in the conference room at his offices about development trends, the Plaza and his and his wife’s future move to Manhattan.

Commercial Observer: Tell us about your upcoming developments.

We are designing smaller units at [234 East] 23rd Street. It’s going to be really cool and geared more toward the younger, first-time buyers.

I don’t want to say anything against any other development. The façade of the building is different. In any one of our projects right now, we are not designing a glass building. We are of the opinion there is a movement toward more brick and limestone, keeping very big windows. So 23rd Street and [261] West 25th Street—with the exterior of those will be the industrial look and feel with very big casement windows. Specifically about 23rd Street, the design of the lobby and the design of the units is very much like a very cool boutique hotel.

What building trends do you think are “out”?

I think glass towers are still “in” only for very, very tall buildings [between 50 and 70 stories]. When we’re looking at our projects, we shy away from the glass towers. We think the glass buildings aren’t as personal as buildings that are designed either with limestone or brick, with very big openings.

Are there any other trends you’re seeing now?

There are two major changes I see between the prefinancial-crisis years and today. First of all, the size of units—there’s a huge demand for really, really big units. When I worked on the design of the Plaza conversion, we knew we’d have buyers looking for big units. But even when I designed it, I didn’t want to design 10,000-square-foot units and be in a position, God forbid, [where] I don’t have a buyer and I’ll have to slice and dice it, which is very difficult after construction. So what we did is design units that are very easy to combine, and eventually we had more than 10 customers that combined five or six units to make between 8,000 to 10,000 square feet. That was at the tail end of the boom. Now, we are in a position where there is a huge demand for really big units, [meaning] 3,000 to 4,000 square feet. It’s almost like a typical unit in many projects right now.

The second major change I see is that the quality and the design that we all need to deliver is at a completely different level. It’s great because we all design and deliver a much better project. If you combine the two, the cost is obviously much higher to build and design much better units, and the cost to buy those units is much higher.

Speaking of the Plaza, why do you think the renovation was controversial?

It’s very simple. The union didn’t want us to convert the Plaza from hotel to residential for an obvious reason: They didn’t want to lose jobs. And it was an election year, and it was the Plaza. So, it was actually a perfect storm. But we dealt with it. We worked with the union; we negotiated with them for weeks. But the finale of everything was when I spent five days and nights in City Hall and we negotiated a deal. [Mayor Michael] Bloomberg was actually involved in that—he and his team. We reached a settlement agreement. Once we did that, the union actually supported us, so it was a very, very, very profitable project.

What was the Plaza like before you did the renovation?

We took a building that was in very, very bad shape. There were 65 rooms out of use at the time out of 800 and change. There was serious water damage. It was really terrible. We were sitting in the Palm Court, and there were mice running around. Some of the people just remember the Plaza from the ’60s and ’70s, but the condition was terrible. It was a private project, and we invested $450 million. We frankly didn’t expect at the beginning that we’d have to invest so much. We decided to open the walls and realized the extensive damage from everything. It was neglected for so many years. The previous ownership lost money running the hotel, so they couldn’t invest money just to maintain the property.

Is the market better for residential rather than commercial development?

In my opinion, yes. It’s very strong. And there is still not enough inventory, even with all the activity you see right now in the market.

What’s something you haven’t done in real estate that you would like to do?

And One Madison [Avenue], this is something that we never built, and I love it. It’s the only project we designed and never built. At the time, we worked with SL Green, which owns the commercial building, to develop the tower on top. We hired Daniel Libeskind, and he came up with this, in my opinion, very good design. There is a cut-out in the building that wraps the structure from the base to the top. It’s almost like a thread. About 50 percent of the units are penthouse units with outdoor space because of the setbacks. Before we were ready with the construction documents, we went through the financial crisis and stopped everything. If you ask me what I would love to build, this is it.

For residential sales, it’s actually the Financial District. But other people are very successful over there.

You’ve talked about moving into 182 West 82nd Street. Why that building of yours?

My wife eventually agreed [to move from New Jersey]. She doesn’t like big buildings. She doesn’t like to live high up. She wants something cozy, small and personal. And 82nd Street is perfect, because we developed a very high-end boutique condominium building with only 11 units between 2,500 and 7,000 square feet.

When will it be done?

The last quarter of this year. We sold out, by the way.

What were the sales prices in the building?

No, my unit was not as big. It’s about 2,500 [square feet]—three bedrooms and three-and-a-half baths. We have a big house in the suburbs.

Well, we’re keeping it for the first year. That’s the deal. Then we’ll see.