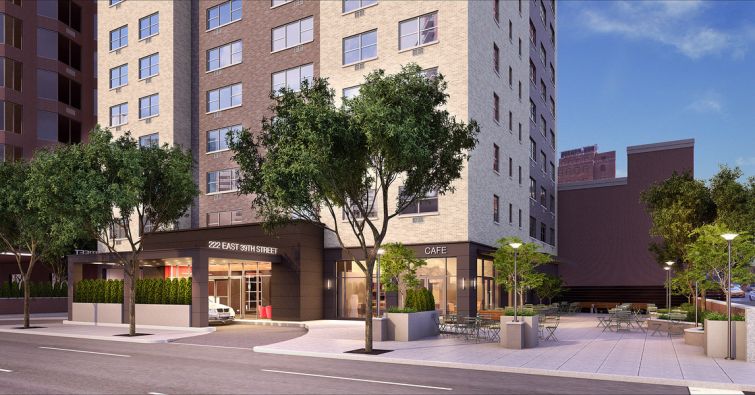 Lloyd Goldman of BLDG Management has acquired The Nash, a 191-unit apartment building located at 222 East 39th Street in Murray Hill, for $126 million.

The sellers, a partnership led by Atlas Capital, Rockpoint Group and The Procaccianti Group, acquired the debt on the property, then known as the Eastgate Tower Hotel, in 2012 with a plan to convert the building to apartments. The property exited bankruptcy in November 2012 and renovation of the building began in early 2013.

The renovation included converting the hotel rooms to one-, two- and three-bedroom apartments and adding a roof deck, fitness center and bike room. The rentals began leasing in August 2013. A three-bedroom apartment is currently on the market and asking $6,374 per month, according to StreetEasy. The building is approximately 70 percent leased.

“Residential assets of this size, scope, and quality rarely become available for sale, especially in Midtown,” Eastern Consolidated Executive Vice Chairman Brian Ezratty, who represented the seller in the transaction, said in a prepared statement. “There was a heated bidding process, which enabled us to achieve a maximum price on behalf of the seller. And the buyer now controls one of the best residential rental properties in the neighborhood.”

Mr. Ezraty represented the seller alongside Scott Ellard. The deal was first reported by The New York Post.