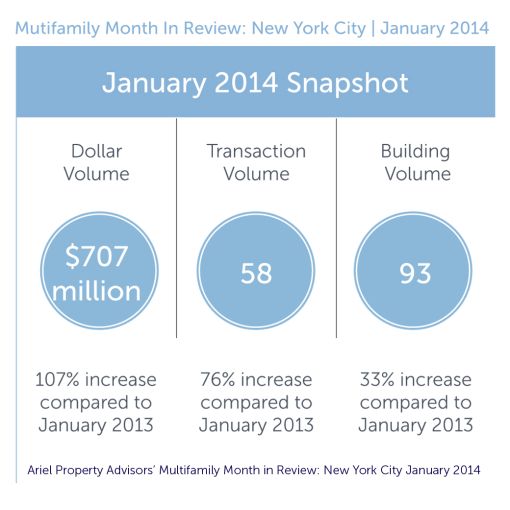 The number of multifamily sales in New York City saw a 76 percent increase year-over-year in January, according to a new report from Ariel Property Advisors. The dollar volume generated by those deals rose by 107 percent.

This January, there were 58 such deals involving 93 buildings and totaling $707.302 million in gross consideration, Ariel Property Advisors found in its monthly review of multifamily deals that occur at a minimum sales price of $1 million, with a minimum gross area of 5,000 square feet and with a minimum of 10 units.

While the activity was up, it slowed for the six months ending this January. The average monthly transaction volume dropped slightly to 64 transactions per month. The six-month average dollar volume also fell slightly to $852 million.

“The growth in January’s year-over-year numbers suggests that 2014 is going to be a robust year for New York City multifamily sales, in terms of both pricing and volume,” said Shimon Shkury, the president of Ariel Property Advisors, in a prepared statement. “Contract signings and new listing activity we’ve seen during the first quarter back this up.”

Meanwhile, the number of deals and dollar volume dropped in January compared to a month prior, which the firm said “is a somewhat regular occurrence at the beginning of the year since many deals are pushed to close in December for tax purposes.”