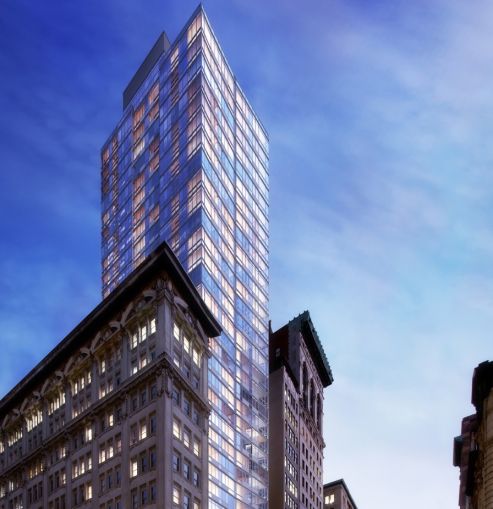 BNB Hana Bank has signed a 20-year lease for a 9,500-square-foot retail space at The Dylan, a new luxury residential development at 309 5th Avenue in Koreatown, Commercial Observer has learned.

The bank plans to relocate to the property in September from their current 250 Fifth Avenue location, the result of Hana Financial Group’s recent acquisition of BNB — which has a decades-long track record of serving Korean-American small-business owners — and a desire for a more prominent location within Manhattan’s Korean community.

“If a Korean retail bank is going to come to America, New York is the first place to hit,” said Soon Rhee, an executive managing director at First New York Realty Brokers, who represented BNB Hana Bank. “They wanted to come in with a strong presence in New York in order to be able to compete better in the heart of Koreatown.”

“They were just too far away,” she added, regarding BNB’s previous location, which it had occupied for two decades.

The Dylan is a 34-story glassy tower, developed by Urban Development Partners, featuring a mix of studios, one-bedrooms, and two-bedrooms reportedly ranging in price from $3,105 to $6,695 per month.

The surrounding area hosts a number of Korean banks, which first and foremost tend to cater to the Korean community, including Woori America, BBCN, Wilshire and Shinhan banks. But none have quite the setup that BNB Hana has acquired – a newly constructed, “full-use gorgeous space, with high ceilings,” ample frontage and a 4,500-square-foot ground floor with asking rents of $200 per square foot, Ms. Rhee noted.

“It was a win-win for both the landlord and the bank,” she said. “There is no retail space with this frontage, in this area, and the landlord got the best of the best tenant.”

BNB Chairman Sam Chung founded BNB as Broadway National Bank in 1986, later moving the headquarters to Fort Lee, New Jersey, until its ultimate sale due in part to increased regulatory scrutiny beginning in late 2009 regarding what were deemed unsafe levels of bad loans.

Hana Bank’s wholesale arm, a sister to the financial/banking division, last year renewed its 7,318 square-foot office lease on the 15th floor at 650 Fifth Avenue. Ms. Rhee was among the brokers representing Hana in that deal.

Ownership had planned to reap the rewards of an ongoing capital improvement project at the building, but a federal judge brought the hammer down late last year, ordering Alavi Foundation and Assa Corporation to forfeit all assets subject to litigation brought by the U.S. government, including their ownership stakes at 650 Fifth Avenue. The tenants, however, have been unaffected – in fact, they are thriving, Ms. Rhee said.

“The new leasing agents were extremely aggressive,” she said, regarding a CBRE leasing team, “and they gave us what they wanted and we haven’t had any problems or disturbance.”