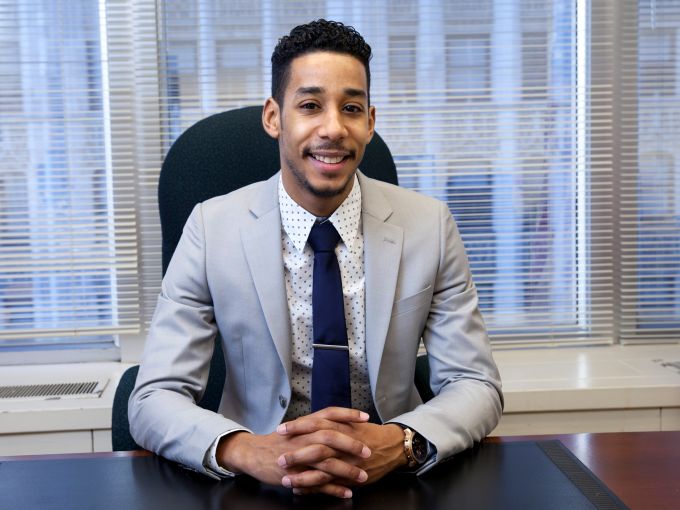 As the new councilman for District 34, which includes Williamsburg and portions of Bushwick in Brooklyn and South Ridgewood in Queens, Councilman Antonio Reynoso personally understands the issues of his constituents.

He was born, bred and still lives in Williamsburg, a neighborhood he hopes never to leave. Plus, Mr. Reynoso spent seven years under the tutelage of his predecessor, Councilwoman Diana Reyna, working as her budget director, legislative director and, eventually, chief of staff until he quit to campaign for her seat.

Mr. Reynoso, clad in a spiffy, fitted gray suit, has seen the impact of gentrification in Williamsburg and wants to ensure that Bushwick doesn’t suffer the same fate. Like Ms. Reyna, Mr. Reynoso wants to be the people’s representative, but he also wants to think more globally by being a legislator.

Commercial Observer: Why do you think you won the election?

Mr. Reynoso: A big part of is it that I’ve been doing this work for seven years under Councilmember Reyna. So I met the community and knew the community. I was born and raised in Williamsburg—all 30 years of my life. I know everyone. Also, I was running against Vito Lopez, who’s public enemy No. 1 in a lot of circles, especially in the one where I [ ran]. I’ve been part of a reform movement, the New Kings Democrats, since I started with the councilmember. It’s a young political organization that was started about five years ago. We’ve been working on reform mainly. We got an opportunity to go after [Mr.  Lopez], and we took it. The last thing we wanted is for this community to be represented by [Mr.] Vito. That’s for sure. It would’ve been an embarrassment. We had smart voters, informed voters, and I ended up winning by a big margin.

Mr. Lopez gave tax breaks to developers while he was an assemblyman and the chair of the assembly housing committee. How do you propose to get on the good side of developers?

I don’t really care to be on the good side of developers. If a developer wants to do right by a community, absolutely we can work with them. All these developers come in, build, sell and then go. They build condos, not rentals, so they have no long-term investments in any of these communities. When they come into any part of my district, I’m going to give them hell. I’m going to make sure I can get the most for my community.

What do you propose to do to limit the amount of influence real estate developers have in politics?

There’s very little we can do. [East Side Councilman] Dan Garodnick has a great bill when it comes to campaigns. He’s requesting that anyone who does any work in campaigns has to state who they are. For example, Jobs for New York was the real estate companies’ independent campaign expenditure, [through which] they spent millions of dollars on candidates that they thought were going to be good for real estate. [Update: Mr Reynoso mistakenly cited Good Jobs New York as being backed by real estate when he meant Jobs for New York.  A spokesperson for Good Jobs New York said GJNY has never made campaign contributions or been involved in any independent political campaign.]

I read that you are working on a proposal to rezone parts of the rapidly gentrifying neighborhood of Bushwick to make it harder to build massive towers. Tell us about this.

I’m looking to rezone Bushwick, but we’re going to look at it comprehensively. We’re going to sit with community groups, scholars, government [representatives] and residents and talk about how we are going to preserve the character—I mean physical character. Some people thought I meant I wanted to keep the Latinos in Bushwick, and that’s not what it’s about.

Bushwick is a beautiful, beautiful neighborhood. Right now, there are small mansions in Bushwick that are gorgeous, and none of them are protected. Rezoning would state that a developer can’t knock down one of these mansions and build a six-story building, for example.

Would you consider yourself anti-development?

No. I’m not anti-development. I’m anti-irresponsible development, which is what we see in Williamsburg.

How has it been dealing with developers?

All developers are—how do I say it?—don’t judge a book by its cover, for sure. They’re nice when they meet you. They promise you the world, but once they build, they’re gone. There’s no accountability to anyone in the community. The Edge may be the worst affordable housing project that I’ve seen in my time as a liaison and as a councilmember. The poor [were put in a separate building] on one side. They also did a terrible job with marketing, which is insane.

My predecessor was deeply rooted in local issues. Everything was very local. That’s what I think she did great. She’s the people’s representative 100 percent. I think we can still accomplish that and be legislators to a certain degree.

You grew up in Section 8 housing. Where are you living now?

I grew up at 409 Hewes Street my entire life. I’m living a block away from where I grew up, [but] I’m moving soon, [because] I live with my sister and my nephew in a one-bedroom apartment. It’s very tight. I’m apartment hunting right now. I want to stay [in Williamsburg] forever if I can.

Do you have an agent?

No. I’m independently doing it.

Do you have a partner?

I have a girlfriend [of four years]. Maybe I shouldn’t have said that but it’s fine.

Are you planning to move in with her?

Are you the youngest current councilmember?

And are you the spiffiest dressed member in the council?

One of the top. All of the young guys dress well. And Jimmy Van Bramer from Queens—he’s special. He competes.