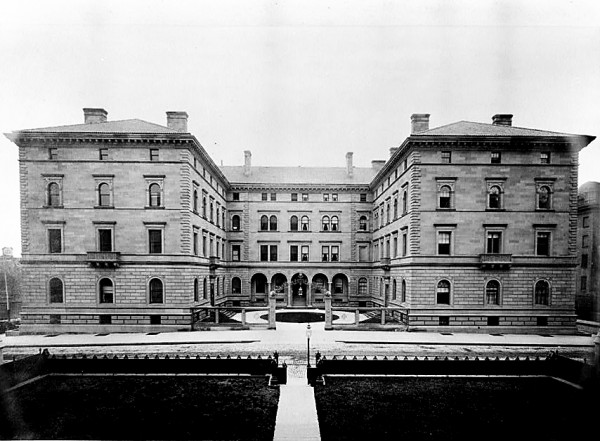 The New York Palace Hotel at 455 Madison Avenue truly does have a royal, though once troubled, past.

European-born journalist and railroad financier Henry Villard commissions the prominent architecture firm McKim, Mead and White to design the neo-Italian Villard Houses at 451-457 Madison Avenue. The six private homes surround a courtyard between 50th and 51st Streets and are completed two years later in 1884. Soon after the Villard residences are constructed, Mr. Villard losses his fortune, and in 1886, Elizabeth Mills Reid, the wife of New York Tribune editor Whitelaw Reid, purchases the property.

Following her death in 1931, Mrs. Reid’s home is turned into the Women’s Military Services Club in 1943. Mayor Fiorello LaGuardia arrives at the dedication ceremony and at one point tells those in attendance, including a New York Times reporter, “You won’t see any more private mansions like this; you’ll see more wholesome houses for more people.” By the end of World War II, in September 1945, more than 250,000 military women have slept at the Villard Houses at the cost of 50 cents per night.

In 1968, the four-year-old Landmarks Preservation Commission designates the Villard Houses a historic landmark. At that time, Random House owns and occupies one of the buildings, and the Archdiocese of New York owns and occupies the remainder. In the spring of 1974, the wealthy developer and real estate investor Harry Helmsley proposes a 55-story hotel be built directly behind the Villard Houses, which he names the Helmsley Palace Hotel. Mr. Helmsley hires the family-run architecture firm Emery Roth & Sons to construct his hotel tower so that it blends with the Villard Houses and Manhattan’s surrounding skyline.

The Helmsley Palace Hotel opens in 1981 and is operated by Mr. Helmsley until 1993, at which point the hotel is taken over by a private, limited partnership owned by the family of Hassanal Bolkiah, the Sultan of Brunei. The hotel reverts to its bondholders from Mr. Helmsley’s wife, Leona, who was convicted of federal income tax evasion, and is purchased by the Sultan’s family for $202 million with the approval of the U.S. Bankruptcy Court. The new owners change the hotel’s name to the New York Palace.

In the late 1990s, Sultan Bolkiah accuses his younger brother, Prince Jefri Bolkiah, of misappropriating billions of dollars from the family’s investment agency. In 2007, Prince Jefri is ordered by the Court of Brunei to sell off the New York Palace, among other properties. According to Mr. Bolkiah, his brother owes him upward of 3 billion pounds. In 2008, the Brunei government takes direct ownership of the hotel from Prince Jefri.

Northwood Investors acquires the New York Palace hotel in 2011 from the Sultan of Brunei for about $400 million. The private global real estate investment firm commissions a $150 million renovation and modernization project on the 100,000-square-foot Villard Houses in October 2013. The new owners hire the Manhattan-based construction firm CNY Interiors to provide management services for the upgrade, including refurbishing the existing floor areas, installing new systems and installing a new elevator shaft and cab. Wells Fargo’s hospitality finance group provides a $250 million loan on the hotel on Nov. 5, a person familiar with the transaction tells Mortgage Observer.