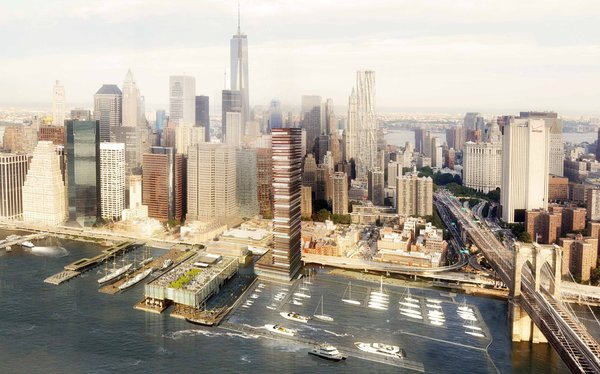 Community Board 1 claims to have received assurances from the New York City Economic Development Corporation and the Manhattan Borough President that the city will not move forward with the approval process for Howard Hughes Corporation’s planned redevelopment of the South Street Seaport before a community planning process is completed. The process may take the form of a community task force, according to board members, but the details have yet to be confirmed.

“Our chairperson announced that we are working together to figure out what the planning process will be,” Diana Switaj, CB1’s director of planning, told Commercial Observer. “It’s likely to be a task force, but we haven’t decided exactly.”

Community Board 1 has reached a verbal agreement with the EDC but the decision is not yet official, according to Ms. Switaj. The community board hopes to receive a signed document confirming the agreement in the coming days.

The EDC, however, contends there is no delay in the approval process, which is set to proceed on schedule. Howard Hughes’ letter of intent requires the developer to stick to an agreed upon timeline but no additional documents are forthcoming, according to the agency.

“This proposal is at the very beginning of what will ultimately be an extensive public review process, and we have strongly encouraged Howard Hughes Corporation to work with local stakeholders to solicit their input and understand their concerns,” said Kate Blumm, vice president of public affairs for the EDC, in an emailed statement.  “We’re encouraged by the steps the developer is taking in concert with elected officials to more formally structure community involvement, and we look forward to seeing the dialogue evolve. To date, the process is moving as anticipated along the timeline previously agreed upon.”

Prior to last night’s community board meeting, developer Howard Hughes had appeared to be on course to begin the Uniform Land Use Review Procedure for a widely opposed 50-story residential building development designed by SHoP Architects. Over 200 people attended a public forum at Pace University earlier this month, the majority expressing opposition to the plans, which call for the demolition of the historic New Market Building to accommodate the residential development.

“Howard Hughes Corporation’s plan to date will not go forward as presented,” said Catherine McVay Hughes, chairperson of Community Board 1, in her January 2014 report.

In line with assertions from the EDC, Howard Hughes insists the approval process will continue as planned.

“The process has not stopped, and we are discussing the formation of a community advisory board as a continuation of that approach to complete our plans before we begin the upcoming ULURP process,” a spokesperson for the company told Commercial Observer in an emailed statement. “As with the redevelopment of Pier 17, we firmly believe that a collaborative process involving the community and its various stakeholders will result in a plan for the neighborhood that will inspire locals and visitors to return to the Seaport.”