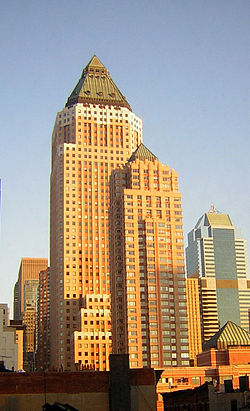 The lawsuit, filed last month, alleges RXR had reached an agreement to buy the 48.9 percent stake in the 59-story, 1.8-million-square-foot tower with American Realty Capital as an investment partner, which included the right to purchase the entire property for a combined $1.35 billion. American Realty Capital instead struck out on its own and completed the acquisition of an equity stake in the building last week. The transaction includes the right to buy the remainder of the building for a total deal value of $1.45 billion.

RXR’s legal representation, however, argues it is unlikely American Realty Capital could have closed the deal without the use of RXR’s deal analysis and plans to move forward with the case, despite the sale.

“There’s absolutely no way [American Realty Capital] could have done this deal without using RXR’s analysis,” Mr. Meister, partner at Meister Seelig & Fein LLP, said in an interview Friday afternoon. “They broke the confidentiality agreement and I will hold them accountable and I’ll prove it in court.”

Mr. Meister will demand American Realty Capital produce its own, proprietary analysis documentation, which he claims does not exist.

“If they had it, they would have produced it,” he said. “I know its not there and therefore that is why I think I’m going to win.”

American Realty Capital’s representation, for its part, plans to file a motion to dismiss the complaint within the next 10 days, according to Y. David Scharf, partner and chair at Morrison Cohen.

“One of the reasons we believe the court allowed the deal to go through is because we feel we were able to demonstrate there is clear evidence that RXR’s information was not used in the due diligence of getting the deal done,” Mr. Scharf told The Commercial Observer. “All of the analytics were fresh.”

Another point of contention is the deal structure of the American Realty Capital acquisition, which Mr. Meister said bares a striking resemblance to the proprietary structure devised by RXR Realty. The deal structure, split over time, includes a number of advantages, including a lack of transfer tax.

“It is the proprietary architecture of RXR and in the contract between RXR and Worldwide, there is specific confidentiality that was agreed to that the owner’s wouldn’t utilize the provisions of the contract with anyone else and they violated that provision by essentially duplicating the contract,” Mr. Meister said.

Based on the accumulated evidence, Mr. Meister said he is confident of prevailing in the case. He conceded, however, that a resolution was unlikely to come quickly.

“The wheels of justice grind slowly,” he said.

There is equal optimism on the side of American Realty Capital. “We are very confident we will be able to vigorously argue the case and prevail in defending the client,” Mr. Scharf said.