The Company Man: Seth Pinsky Reflects on EDC and Looks Ahead at RXR 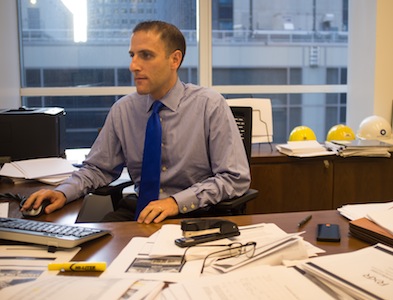 In July, Seth Pinsky, then the president of the New York City Economic Development Corporation, announced he would soon shift from the public sector to the private sector. In his decade-long stint at the EDC, Mr. Pinsky boosted his reputation citywide by helping to secure a number of high-profile development projects, including Atlantic Yards, Hudson Yards and the Cornell Tech campus, and by initiating the response to areas of the city hit hardest by Hurricane Sandy. In his next chapter, Mr. Pinsky will spearhead RXR Realty’s Emerging Markets platform, which aims to identify growth opportunities in New York City and the surrounding metropolitan area. Mr. Pinsky, who joined RXR last month as executive vice president, spoke with The Commercial Observer last week at the developer’s Midtown offices and spent time discussing his tenure at the EDC and his new role. What motivated your decision to move to RXR from the EDC, and what about the RXR opportunity in particular intrigued you?

My position at the EDC was for all intents and purposes a mayoral appointment, and, after 10 years of having been there and having a really phenomenal experience, it became clear that I would likely have to move on anyway.

It was with great sadness that I began to search for the next phase, but the good news was that once I started talking to people I saw there were many great opportunities outside of the EDC. I immediately hit it off with Scott Rechler and felt that the opportunity that we were discussing here was something that would build off the work I had done and the approach that I had taken during my time in the Bloomberg administration but would also allow me to both broaden the scope of what I was thinking about geographically and to learn from a great group of people. It became an easy decision once it became a real option.

Did you evaluate opportunities in different sectors, or was real estate an area you pinpointed?

I’ve always been interested in real estate, and, before working at EDC, I had worked for a number of years as a real estate lawyer and obviously did a lot of real estate work at the EDC. I certainly thought about other opportunities—and, in fact, pursued a couple of other opportunities—but real estate was always high on my list. What I wanted was something that would be a logical continuation of what I had been doing but would also be a new challenge.

Looking back at your time at the EDC, is there one accomplishment you’re most proud of?

There’s a long list of projects that I think will have—that I hope will have—a significant impact on the city, and certainly those projects are things of which I am proud, whether it’s the Cornell Technion Campus or the other applied sciences campuses around the city or the work around the World Trade Center or the development projects that we spearheaded from Staten Island to Coney Island to Willets Point. All of those things are things of which I am proud.

What I think I am most proud of is what we as an administration did in rethinking the model of economic development in New York and taking it from something that had previously been focused almost exclusively on tax incentives or business retention and real estate development and broadening it well beyond that—thinking more strategically and adding a certain analytical rigor to the process. I hope that is something that will be carried on in the next administration even if the tactics they adopt are different.

Is there anything you look back on that you would have done differently?

I would be arrogant if I said that there was nothing that I could do better. In retrospect, when you look at projects, especially those that have been completed, there are always things about them that you wish could have been different or bigger or smaller or somehow improved upon. Getting things done in New York is a huge challenge, and, if you want to be successful, you have to be pragmatic, and being pragmatic means you have to make compromises. One of the things that I think the Bloomberg administration did well was not letting the perfect become the enemy of the good. I believe that for the most part what we accomplished was the best that could be accomplished given the host of other factors with which we had to deal.

I would answer that in a few ways. First of all, I believe the city’s Economic Development Corporation is a really precious resource that I didn’t fully appreciate when I first came to work there, and I certainly hope that whoever the next mayor is—even if that mayor determines to change tactics—that he continues to nurture the institution. On a certain level, the success of the EDC is something that is based on factors that certainly predated me and will very likely continue to exist going forward.

You’ve been at RXR for about a month now and were brought on to spearhead an emerging markets initiative. Can you explain the project and your role?

The emerging markets platform really grew out of a conversation that Scott Rechler and I began about a year ago, where I brought to him thoughts that I had about development in a particular part of the city based on insights that I had had getting to know that area through my work at EDC. One of the things that really attracted me to RXR was that in response to that he challenged me to think more broadly—that really what I was describing was not a specific neighborhood but a type of neighborhood and a type of market in the New York area, of which there are many. He felt, and I very much agree, that those types of markets offer both tremendous opportunity for successful investment by private investors but are also likely to be an important part of the engine of growth for the region.

The way I would characterize the markets we are looking at are along two axes. One is geographic. We are thinking about parts of the city and parts of the region that have suffered from underinvestment or have a negative market perception about them but that we feel have good underlying fundamentals—strong infrastructure, things like that—and looking at investment in those areas.

In addition to that, we are also looking at emerging asset classes. Those are asset classes that either have fallen out of favor with the market or simply do not exist in New York and investing in those asset classes.