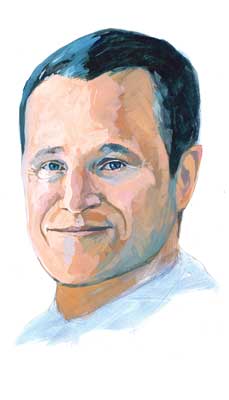 Rob Speyer, president and co-chief executive of New York-based global real estate developer and operating company Tishman Speyer Properties, started off the year with a few big fish to fry for his family’s firm and other commercial real estate leaders in New York. Among them: confronting aggressive landmarking in the city in addition to a rising tax burden on the industry, while helping developers and property owners maintain their growth as real estate rebounds.

At least that’s what his predecessor foresaw when she announced Mr. Speyer’s appointment as the new chairman of the ever-present Real Estate Board of New York in mid-2012. Two industry affiliates recently told The Commercial Observer on background that one of the biggest threats Mr. Speyer faces as chairman is the potential election of Democrat Bill de Blasio as New York’s next mayor.

“I’m sure he’s taking phone calls about the upcoming election and probably sweating himself,” one of them said. “There’s always anxiety when an administration changes in New York City. After a decade-plus of a real-estate-friendly administration, it’s easy to get nervous with the upcoming election, especially when you consider some of the things de Blasio said on the campaign trail.”

Still, apart from another major economic collapse, little could seemingly slow down the rate of acquisitions and developments for the 35-year-old Tishman Speyer with the extent and value of assets in its global portfolio. Mr. Speyer, who joined the company in 1995 after a brief stint as a journalist, helped turn his family’s firm into one of the world’s largest owners of real estate with properties across Northern America, Europe, China, India and Brazil. The Columbia University graduate became Tishman Speyer’s co-CEO alongside his father, Jerry Speyer, in 2008. The two declined to speak to The Commercial Observer for this year’s Owners Magazine issue.

The family-run real estate company was hit by a major investment deal gone bad three years ago but has rebounded since. In the midst of the real estate bust, Tishman Speyer agreed to surrender to creditors its 11,200-unit Stuyvesant Town and Peter Cooper Village apartment complex in Manhattan, eliminating $3.3 billion of investors’ money at the time. The New York-based developer has since scaled back its reliance on other people’s money to acquire property.

That hasn’t stunted Tishman Speyer’s growth. The company now manages a portfolio valued at more than $34 billion, with 12 million square feet under development—most of it overseas. In June, the company completed its purchase of Tour Pacific, a 570,000-square-foot office building in Paris from property management and development company Ivanhoe Cambridge.

At home in the states, Tishman Speyer teamed up with China’s largest real estate developer, China Vank, in the beginning of the year to develop a luxury apartment project in San Francisco.

Apart from buying and building, Mr. Speyer took over as the new REBNY chairman in January, replacing Mary Ann Tighe, who had become the trade association’s first female chairwoman in the beginning of 2010. Mr. Speyer, who turns 44 in October, became the association’s youngest chairman in its 118-year history when he joined in January.

“He has the perfect training,” Ms. Tighe told The Commercial Observer in July 2012 at the time his appointment was announced. “Both his grandfather Robert Tishman and father were chairmen, so when you have that background, he knows what’s entailed, and no one can say he’s not fully prepared.”—Damian Ghigliotty