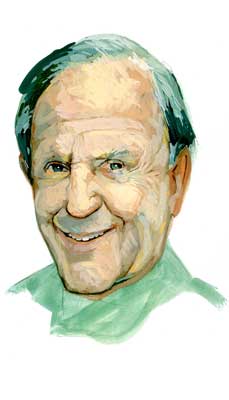 Boston Properties’s co-founder and executive chairman, Mortimer Zuckerman, remains unforgiving of the U.S. economy but thankful for the state of the four markets he and his late partner, Edward Linde, had long placed bets on.

Those are New York, San Francisco, Boston and Washington, D.C.—“grade A locations” where the two started out developing “grade A buildings.”

“Those buildings and locations work not only in good times but also in difficult times, where I think we are now,” Mr. Zuckerman told The Commercial Observer in a fiery phone interview that led to a few shouts. “We have a very weak economy, very low levels of increases in employment, huge debts and deficits, and the economy is growing at a sub-2 percent rate for the fourth year in a row.”

The real estate markets in top-tier cities have recovered much faster, giving prominent owners and developers a major leg-up. Last month, Boston Properties agreed to sell a 45 percent stake in Times Square Tower to Norway’s sovereign-wealth fund for $684 million preceding a joint venture between the two that allows Mr. Zuckerman’s company to keep possession of the property and leasing management. The self-managed real estate investment trust is also getting ready to complete its nearly million-square-foot, 38-story office building at 250 West 55th Street.

Boston Properties, which controls about 9 million square feet of space in New York and about 45 million square feet nationwide, has continued to buy and sell existing property at nearly half the speed of some of its competitors, including Vornado. Instead, the publicly held company has put a greater focus on ground-up development with eight buildings under construction nationwide.

“Our hallmark from day one, when Ed and I started the company, has been our focus on acquiring assets that we think will have the strongest potential for growth and stability in the future,” he said. “I think we’ve continued to do that with both the buildings we buy and the buildings we build.”

But there was a period when transactions took place in more of a hurry. Mr. Zuckerman published an editorial in 2006 in which he wrote that the country was in an unsustainable bubble in residential real estate. He then soon realized a similar problem was occurring in commercial real estate. “Ed and I decided under those circumstances that we were going to sell 16 buildings,” he said. “We got 14 out the door before the market disappeared.”

With the earnings from those property sales, the Boston Properties executives were able to buy the General Motors Building and the John Hancock Tower, among other assets. Mr. Zuckerman, who stepped down from his role as chief executive in April, noted that while his company’s holdings in New York, Boston and D.C. have continued to perform well this year, San Francisco has become the “largest development market” they currently have stakes in.

Apart from buildings, Mr. Zuckerman has remained focused on his media businesses and private affairs. The 76-year-old real estate mogul, who also serves as editor in chief of U.S. News & World Report and publisher of the New York Daily News, was reportedly urged by Michael Bloomberg in late 2012 to run for mayor of New York but declined.

When asked about future ambitions outside of real estate and media, he gave a laugh and told The Commercial Observer, “My ambitions are just to continue to do what I enjoy doing, and that’s what I’ve done my entire career, and that’s why I never took the bar exam.”—Damian Ghigliotty