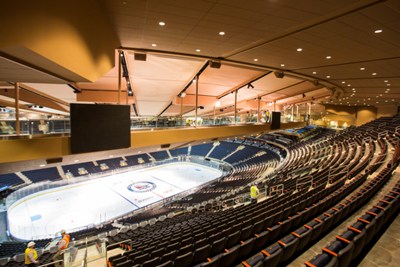 After three years and $1 billion, Madison Square Garden officials today unveiled the third and final phase of the arena’s transformation, a spectacular attempt to blend the venue’s rich history with modern amenities.

The venue, now in its fourth incarnation, has been thoroughly modernized over the past three offseasons. In addition to the renovated entrance, which has been updated from its formerly industrial tone to an expanded and welcoming gateway, the third phase of the arena’s transformation included the addition of two bridges suspended above the action, a balcony with lounge seating, a state-of-the-art scoreboard, and other amenities.

Concerns about the Chase Bridges, which many fans believed would interfere with views of the action, were quickly allayed by Mr. Ratner. Though the fully-ticketed bridges will block views of the scoreboard for some patrons seated in the higher rows of the second tier of the arena, high definition video screens have been installed to counter the obstruction.

“This is the most unique seat you can get for sports or entertainment anywhere,” Mr. Ratner said to a crowd of reporters. “The question we get asked by everyone that comes up is: ‘How can the crowd see the game?’ You’ll see there is not the slightest bit of obstruction to what’s going on on the floor.”

Mr. Ratner was also at pains to stress that fan activity on the bridges would not act as a distraction for those fans seated behind the walkways. He told The Commercial Observer that the bridges would merge “seamlessly” into the action and become part of the experience.

Sprinkled throughout the arena are testaments to the Garden’s past. The lockers of Patrick Ewing and Wayne Gretzky have been preserved on the suite level of the arena, while various displays of historic events line the walls of both the upper and lower bowls. Craig MacTavish’s jersey from Game Seven of the 1994 Stanley Cup Finals is displayed along with the pucks from all three New York Rangers goals. Elsewhere, the 121212 Hurricane Sandy benefit concert is immortalized with tickets and posters from the event.

The unveiling, complete with star appearances, befitted the Garden’s extensive history and reputation as the World’s Most Famous Arena. 50 Cent, Ed Burns and Al Roker were among a varied cast of scheduled celebrity appearances.

Alluding to both the Garden’s history and his boyhood years in Queens, Governor Cuomo declared that despite all the great events the Garden has already witnessed, the best days are still to come.

“Today isn’t really about our past, it is about our future,” Governor Cuomo said. “This is now going to be the economic engine for New York’s future–$1 billion invested in this building and you know what I like best about it? None of it was my money. To me this is the opening of a new chapter of great New York moments that will be written right here at the Garden.”

The renovated Garden will open officially tomorrow night for the New York Knicks final preseason game versus the Charlotte Bobcats. The New York Rangers will host the Montreal Canadiens on Monday night.