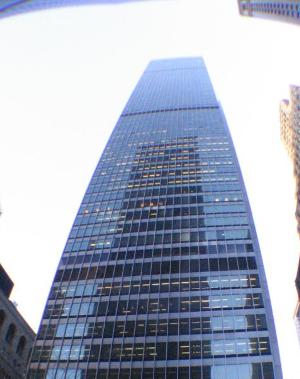 Designed by Skidmore, Owings and Merrill, the building was constructed between 1957 and 1961 and designated a New York City Landmark by the Landmarks Preservation Commission in 2009.

The One Chase Manhattan Plaza deal is just the latest in a series of major investments in New York City real estate by Chinese investors and developers.

Last week, Greenland Holdings Group, a state-owned developer, signed a preliminary deal to buy a majority stake in the Atlantic Yards project in Brooklyn. Earlier this year, the family of Chinese developer Zhang Xin, in partnership with M. Safra and Co. Inc. acquired a 40-percent stake in the General Motors Building for approximately $1.4 billion.

According to earlier reports, JPMorgan plans to relocate many of its employees based at One Chase Manhattan Plaza to other New York locations. However, “according to the agreement, JPMorgan Chase Bank will remain as an important tenant in the building,” the buyer said in a statement.