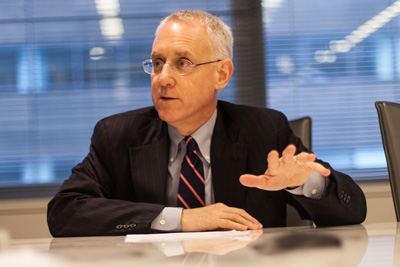 Partner and Co-Head of the New York Real Estate Practice

Due to your client work, what sorts of trends are you seeing with distressed commercial real estate loans?

For starters, a lot of the distressed loan work that we were doing has worked its way through. Of our clients that made it through the financial crisis more or less intact, most of them are doing or planning on doing new originations and have been for about at least a year and a half. We had a lot of distressed debt that we have worked through or foreclosed, but the great bulk of this work has been completed for six months to a year at this point. My New York clients have several foreclosures that we are currently winding down, including an office building in New Jersey, an office building in Long Island and several properties in South Carolina. As a firm we have worked through, resolved or litigated and foreclosed several billion dollars worth of distressed loans.

The interesting thing in New York, particularly, is that a lot of the property development that had halted in the recession is now coming back. You’ve got a lot of condo projects that were mothballed or stopped or partly constructed, including vacant land, and many of these projects are coming back online, and the developers are now finishing up construction and restructuring, or the properties are being resurrected by new developers who have the ability to complete and, if necessary, reposition the projects.

What was the last really big distressed loan sale or workout you were involved in? What sorts of challenges did that involve from a legal standpoint?

I helped a client run through a combination of the two. It was a $1 billion plus portfolio that had had loans ranging from $50 to $60 million down to $10 million. Some of my partners worked loans ranging from several hundred million to $1 billion. Of course, you almost always start out trying to work through a distressed loan or portfolio of loans. Many times you can’t.

The most successful workouts happen when the principals are willing to put some cash in. It gets tougher when there’s money needed and they don’t have enough or they don’t want to put anymore in. Sometimes we found that they’re just the wrong people. They can put all of the money in the world in, but they are just incompetent. In those cases, we sometimes sign workout agreements where, if they don’t meet targets, they’ll consent to a foreclosure. Sometimes, we can’t even get that far, and we’ll just file a foreclosure. Sometimes they’ll threaten bankruptcy, and we’ll say, “Go ahead, do anything you want, we’ve got lawyers who can do bankruptcies, foreclosures, sales and so on.”

In what cases does a distressed loan sale actually take place?

We have had clients that will use the sale of the loan when they’ve decided they don’t want to take the real property back. We did one property in Manhattan where we got all the way through foreclosure and the client decided, for certain reasons, that they just didn’t want to deal with it anymore and told us, “Let’s sell it to somebody.” But they added value back having gotten all the way through foreclosure, so the person buying the loan just had to finish up the foreclosure and then they had control of the asset.

Banks have been shedding distressed commercial loans at a faster pace this year, according to several companies that facilitate loan sales. Why is that the case, and what does it mean for the real estate market?

Thank you, Ben Bernanke. He’s kept interest rates low, and with the economy getting somewhat better, people are more confident about putting dollars in real estate. That’s inflated real estate prices, so the banks can now sell their distressed assets for a higher price. Banks carry these loans and REO on their books at a certain amount. If they sell below that amount, the bank’s capital is impaired and they have to worry about not having enough risk-based capital, in addition to the regulators being all over them for not keeping their capital levels high. That’s one reason the banks kept these loans on their books for so long. The other reason they kept them on their books is because they actually remembered what happened during the last downturn in the late ’80s and early ’90s.

Now, of course, with real estate prices rising, when the banks sell their distressed loans, they’re getting much better values. That clears the market and gets these projects going again, whether it’s a construction project that stalled, an office building that was half empty or a hotel that was shuttered. Getting properties away from banks or the government is always a good thing, because banks and the government are not really in the business of running real estate.