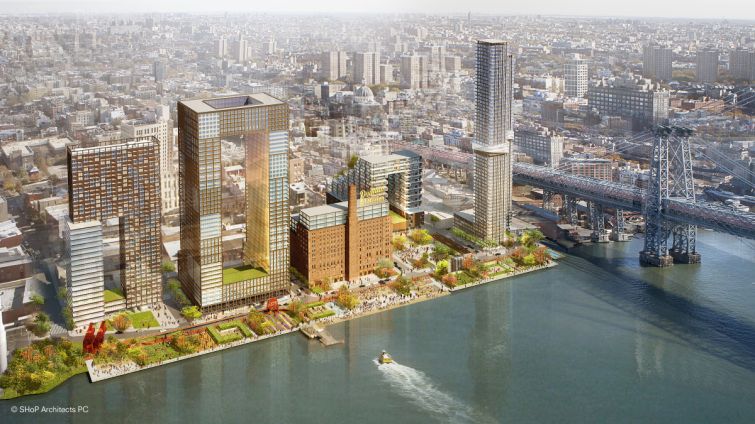 Brooklyn’s popularity with investors has accelerated in recent years as waterfront development sites and retail properties have attracted a variety of buyers, according to a recent report from Eastern Consolidated. The largest and most notable of recent transactions was Two Trees Management’s acquisition of the Domino Sugar Factory at 318 Kent Avenue for $185 million last year, but potential for future development still exists.

“There’s a whole new frontier in Brooklyn,” Barbara Denham, chief economist at Eastern Consolidated, told The Commercial Observer. “There’s the waterfront, and there are so many sites on Kent Avenue that have either traded or are in the process of going on the market.” Tapping into the demand, Eastern Consolidated is currently marketing a nearly four acre development site at 462-490 Kent Avenue in South Williamsburg for $210 million. The mixed-use project is a Uniform Land Use Review Procedure-approved 70/30 affordable housing project with retail and parking components.

“There is a fairly significant amount of green space and open space on the waterfront,” said Gabe Saffioti, director. “But one of the great things about it is that is has a retail component.”

The site, with 816,000 buildable square feet and a 421-a partial tax exemption, is located on the edge of what Mr. Saffioti refers to as the “Golden Triangle,” bounded by the Williamsburg Bridge, the Brooklyn Queens Expressway and McCarren Park.

Though there are a number of waterfront industrial sites, the Kent Avenue opportunity is the last site within the triangle, outside of the Domino Sugar Factory, zoned for a residential component.

“If you drive down the waterfront, there are so many industrial sites,” Ms. Denham said. “That could present an opportunity, depending on zoning.”

Though commercial space in Brooklyn has trailed development and multifamily activity, plans for the Domino Sugar Factory and the Brooklyn Navy Yard will present a number of new office opportunities in the borough.

“What we are seeing in the Navy Yard, it is such a humongous commercial development,” Mr. Saffioti noted. “An enormous amount of potential is being realized, the Tech Triangle is going to be huge.”