With 150 Charles Street and Now 10 Madison Square West, Steven Witkoff May Be the King of Condo Financing 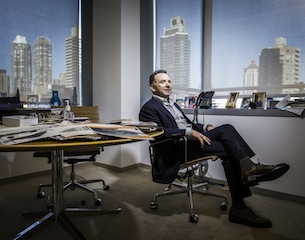 Steven Witkoff paced back and forth in a conference room at his partnership’s New York City office, eager to talk about his latest endeavors, but just as eager to tackle the other 10 commitments that had come his way.

His partner, Scott Alper, and his personal assistant each stopped by the room twice to remind him about various appointments on his schedule, and Mr. Witkoff bounced between conversations about meeting an inspector in the city the next morning, picking up a friend of the family on his way home, heading down to Florida the following Monday to take care of more business before “hitting some golf balls,” and the best way to approach potentially sensitive questions.

Mr. Witkoff, 56, has stayed active in the New York and Miami real estate arenas, among others, through their respective ups and downs. Not only as an owner, operator and leaser of high-end properties, including 1745 Broadway, 10 Madison Square West and the landmark Woolworth Building, but also as a developer who continually oversees new construction projects, from legal and safety compliance to financing each development through its various phases.

Several of those construction projects have been notable not only for their scope but also for what they represent: the return of successful financing for high-profile condo construction, at least for the right borrower and the right project.

Condo construction financing in New York City hit a brick wall during the economic downturn and has rebounded only for top-ranking developers, such as Mr. Witkoff and Gary Barnett, whose Extell Development Company is behind One57.

And with relationships key to getting deals inked, the Bronx-born Mr. Witkoff proudly boasts about putting deep relationships with his lenders above all else. Those lenders include M&T Bank’s John Cook, Gino Martocci and Peter D’Arcy, as well as Wells Fargo’s Alan Wiener and Michael Kaczynski, whom Mr. Witkoff calls “dear friends.”

M&T and Wells Fargo provided the bulk of the construction loans for 150 Charles Street in Manhattan’s West Village, which The Witkoff Group originally purchased in 2004 and secured construction financing for at the end of 2012. Mr. Witkoff had gone through a previous round of loan negotiations in 2007 before the project was stalled, he said.

The project hit several road bumps along the way, beginning with the financial crisis and followed by protests and a lawsuit by neighbors who alleged that the Witkoff Group had torn down an on-site building it was supposed to expand rather than destroy.

That lawsuit was later dismissed.

Construction on the luxury condominium is now finally under way and slated for completion in the final quarter of 2014. The 16-story brick-and-glass building is set to include 40,000 square feet of outdoor space with a courtyard garden, valet parking and a 75-foot lap pool lined with mosaic stone. Market prices range from $3 million to $6.5 million for one- and two-bedroom units and between $6.5 million and $9 million for three-bedroom units. A five-bedroom, five-and-a-half-bathroom penthouse is on the market for $35 million.

“The sales office we built down there was as much for the buying public as it was for our bankers,” said Mr. Witkoff. “We wanted to say to them, ‘Look, you lent us $230 million in the construction loan. Look at what we’re creating here.’”

M&T and Wells Fargo, along with PNC, are also in the final stages of negotiations to provide a $234 million loan for the former International Toy Center-turned-luxury condominium at 1107 Broadway in the Flatiron District, which the Witkoff Group purchased in 2011. The developer is in the process of expanding the 16-story building, rebranded 10 Madison Square West, adding six additional floors on top as well as a yoga studio, fitness center and 60-foot pool.

The drop-off in financing for such projects is a well-documented chapter in the economic downturn’s impact on commercial real estate lending in New York City and elsewhere.