Bank of America: Off to the Races 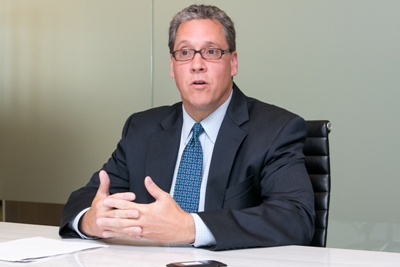 Training for a marathon while working a full-time job would be a challenge for anyone. But working up to that 26.2-mile mark while simultaneously doing your part to contribute to a nation-wide book of transactions that over the last 18 to 20 months included the origination of more than $20 billion in commercial real estate loans might pose its own set of challenges.

Steve Kenny, Bank of America’s commercial real estate banking executive for New York and New Jersey, is doing just that, though. And when he takes to the starting line for the ING New York City Marathon November 4 to set out on a course that will take him through all the five boroughs, the challenges he’ll face will in many ways be business as usual.

Mr. Kenny joined Bank of America in June 2000 from a legacy company, FleetBoston Financial, as a client manager and held this position for a decade. Fleet was acquired by Bank of America on April 1, 2004, for approximately $47 billion in stock.

“Then in May of 2010, there were some changes within the commercial real estate banking group here in New York,” Mr. Kenny remembered over breakfast recently. “And there was an opportunity for me to take over the leadership role and be the market executive for real estate here in New York and New Jersey.”

At the time, the country had just experienced three straight quarters of growth. Harvard professor Jeff Frankel declared the end of the recession on his blog, following a March uptick in employment reported by the Bureau of Labor Statistics. Still, lending in commercial real estate was on shaky ground, even in New York City.

In the reluctance of other lenders, Mr. Kenny saw opportunity.

“We were in a very deep recession in ’08 and ’09 and there was clear indication of an emergence from that and an opportunity to have the business grow again,” Mr. Kenny remembered, adding that of upmost importance in orienting himself to his new role was making sure the right employees, mindset, clients and strategy were in place. “That’s taken time for us to align all of that, but I think we had great success in 2011 because of having the right people, having the right philosophy, having the right clients. We have a lot of fantastic clients.”

Growing the business has meant endeavoring to augment the success of the bank’s construction lending platform with more bridge and term debt financing, thereby achieving a more balanced portfolio. Mr. Kenny emphasized the importance of this several times over the course of multiple conversations, in fact. This is meant to happen while forging ahead with lending on deals like Extell Development’s 90-story, mixed-use One57 project, for which Bank of America led the syndicate on the $700 million construction loan.

“It allows you to advance dollars more quickly because construction money goes out incrementally,” Mr. Kenny explained. “And obviously we’re a for-profit-driven business and enterprise and we want to put our money to work sooner rather than later.”

Augmenting the construction lending platform, however, means first and foremost getting the word out. Mr. Kenny said this is one of the top priorities—and also one of the easiest to achieve, since he’s in part dealing with a captive audience.

“Our existing clients think of us the way that we’ve projected and portrayed ourselves for a period of time, and we need to make sure that they understand what it is that we’re pursuing these days,” he said. “Number two, we need to find new clients. This is the largest real estate market in the United States, and we have a significant number of high quality clients today, but there are other names out there or other clients—what I’ll call prospects for us—that we can, should and will be doing business with in the future.”

Of all of the bank’s loans in the New York area, Extell Development’s One57 project has gotten by far the most attention, initially because on paper it didn’t necessarily look so alluring. “The headline was ‘Condo, Hotel, Construction’ and that was not an easy headline to be selling into,” Mr. Kenny remembered. “As we sit here today, the world’s a little bit different. We did that transaction. There have been a handful of other condominium transactions that have completed, so the bank market has warmed to condo construction, though it’s still somewhat restrictive.”

Mr. Kenny said that One57 has been particularly successful as a marquee transaction. For one thing, it demonstrated Bank of America’s willingness at the time to think outside of the box. He credits Brad Dubeck and Dale Blumenthal—client manager and underwriter, respectively—with structuring the deal. “When the deal originally came in, it didn’t look like and it wasn’t being talked about in the same light as, what we ultimately ended up structuring and being able to sell into the marketplace,” he said. And then he gave credit as well to David Friedman on the syndications team for explaining the intricacies to the banks that would ultimately end up participating in the syndicate.