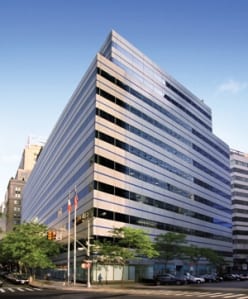 The space the city renewed for is used by the Office of Management and Budget, the Office of the Actuary and the Department of Information Technology and Telecommunications. It is spread across four full floors—6 through 9 there. Also in the building is space used by the Hudson Yards Infrastructure Corporation, created by the city to finance property acquisition and other work on the far west side related to projects like the extension of the No. 7 subway line.

Executive managing director Dennis Brady and managing director of leasing Brett Greenberg handled the leasing for Jack Resnick & Sons in-house. The city didn’t use a broker, according to a spokesman for the landlord.

Mr. Brady told The Commercial Observer that the building is 100 percent occupied, by tenants like RR Donnelley and Sons, Tradition North America and the Borough of Manhattan Community College.

“They have been a long term tenant of ours,” Mr. Brady added, about the city. “To us it was a huge vote of confidence in downtown that the city, who has tremendous options, has elected to remain in our building. The space lays out well for them—there are 50,000-plus square-foot floors.”

Jonathan Resnick, president of Jack Resnick & Sons, said the firm was “delighted that 75 Park Place will continue to serve as the home of these important city agencies, which have been headquartered in our building since 1990.”

Asking rents in the class A building, which Jack Resnick & Sons built in 1986, are in the mid-$40s. The lease renewal is for 15 years and six months.