The Global Food International Corporation, a Russia-based restaurant company, has leased 25,000 square feet at 11 Times Square, filling a large portion of a retail space that been vacant since the new office tower was finished two years ago.

“They’ve been very successful in Russia and they wanted to open their first location in the U.S. in what is the most familiar location both here and around in the world, Times Square,” James Emden, a vice chairman at Colliers International who represented Global Food in the deal, said. Robert Koslow and Dmitry Levkov, executives at Colliers, also worked with Mr. Emden on the transaction.

Mr. Emden said that Global Food would occupy about 6,000 square feet on the ground floor of 11 Times Square and the 1.1 million-square-foot building’s entire second floor, a nearly 19,000 square foot space. It will operate a facility that will feature several partitioned eating areas serviced by traditional restaurant waitstaff and that will each feature different ethnic cuisines.

“They are still planning their concept,” Mr. Emden said.

The deal absorbs a large portion of a space that had been much talked about in the brokerage industry. Because 11 Times Square is brand new and sits at the periphery of one of the city’s busiest and strongest retail neighborhoods, there was early talk that it would attract a blockbuster retail deal. Such speculation appeared to be close to coming to fruition when a large aquarium that would reach up into 11 Times Square’s office floors was rumored to be in talks.

But that deal fell through as did several others, prompting conflicting accounts why, as the city’s retail market rebounded dramatically from the recession, 11 Times Square remained vacant. According to SJP Properties, the building’s landlord, it was particular about what tenants it brought to the building and how the retail would color the property’s image. For instance, the drug store CVS was rumored to be circling the property for months but Jim Schotz, a director of leasing at SJP, said the landlord eventually decided against that deal.

“We had been marketing the space for a couple of years and we were looking for a specific tenant that would benefit the other tenants in the buidling as well as the Times Square neighborhood overall,” Jeff Schotz, a director of leasing at SJP, said. “We did not think a drug store was that kind of tenant.”

“SJP definitely liked the fact that we are an international tenant that fits within the greater context of Times Square, which is a crossroads for the world and draw huge amounts of tourists,” Mr. Emden added.

Another hurdle for 11 Times Square was its location at the edge of Times Square, a spot that retail executives often said was too far off the beaten path to land a bigtime deal. Mr. Emden said that Global Food never saw that liability in the space.

“Global Food saw this as a prime location that would draw all the traditional tourist traffic from Times Square but also benefit from the huge commuter traffic that the bus terminal draws,” Mr. Emden said.

Mr. Emden said the location came with some economic benefits. Global Food agreed to pay about $500 per square foot for the ground floor space, an amount far less than the nearly $2,000 per-square-foot figures many landlords at the heart of Times Square seek.

The deal at 11 Times Square seems to lend a push to Eighth Avenue’s long awaited transformation into a more mainstream retail corridor that will perhaps increasingly attract the heavy tourist traffic just an avenue block away.

David LaPierre, a retail executive at CBRE who wasn’t involved in the 11 Times Square deal but handles Eighth Avenue retail space, said more tenants who in the past would only consider being at the center of Times Square are now more open to going to Eighth Avenue – reflecting the changing perception of the artery. Mr. LaPierre, who is the leasing agent for 30,000 square feet of retail space that is being renovated at Milford Plaza at Eighth Avenue and 45th Street, imagined the stretch becoming a true western extension of Times Square in the coming years as it draws a denser concentration of retailers.

“It’s density that will create a destination,” Mr. LaPierre said.

He pointed to the popular restaurant Shake Shack on the corner of 44th Street and Eighth Avenue as an early example of how the right tenant can draw vistors hitherto unseen on the avenue. The eatery routinely has snaking lines of tourists waiting outside during lunch.

“Shake Shack showed that people will come out to Eighth Avenue for the right tenant,” Mr. LaPierre said. “It’s a burger but it’s not a cheap burger. McDonalds is a cheap burger. It shows there’s a group of people not afraid to spend for a good quality product and that can translate into a host of retail categories.”

Mr. Schotz said that 11 Times Square meanwhile is fielding more offers for the remaining retail space at the property, which totals about 25,000 square feet.

“We have several offers out,” he said, predicting that more deals will be announced within a month.

A leasing team led by Robert K. Futterman and Joshua Strauss, both of the retail brokerage firm RKF, handles retail leasing for SJP at the property. 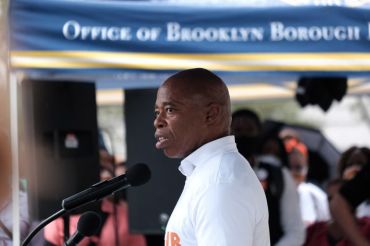